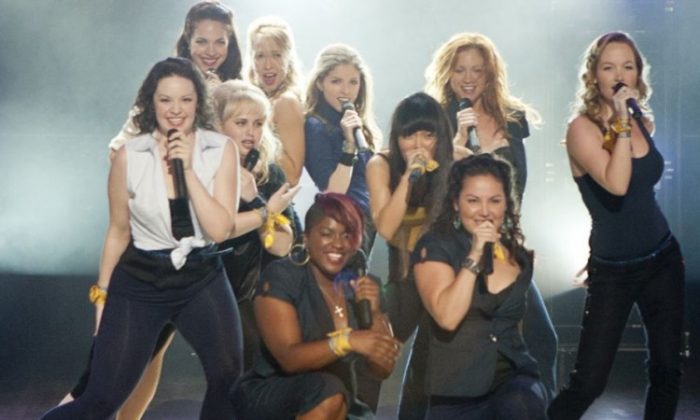 Next up are your dance movies: Step Up (three sequels), and Stomp the Yard … okay, never mind.

A large portion of America also loves the TV show Glee. The cute new movie Pitch Perfect is an a-cappella-singing-team movie, starring the exceptionally cute and very talented Anna Kendrick, so its alternative title might also have been “Bring Glee On.” Or perhaps “Step Glee Up.”

Beca (Anna Kendrick) wants to be a disc jockey, but her professor dad insists that she attend Barden University before heading to Los Angeles to pursue her passion. She’s not thrilled about it.

Faced with a hostile roommate and a geeky suitor who proposes an irresistible date (not!) of drinking juice pouches and watching Star Wars, Beca decides to give a cappella singing the old college try, since, you know, she’s in college.

The original Bellas were pretty, but the new bunch is motley. They’re the Dirty Dozen and the Bad New Bears of a cappella. Just like Glee.

The captain’s a mean-girl taskmaster with conventional tastes. As Beca’s irrepressible talent becomes obvious, she eventually gets the vote to lead the girls out of the ho-hum standards to exciting DJ-style mash-ups. Just like Glee.

So they practice and compete with, among others, their all-male campus rivals, the Treble Makers. In all of these movies about team competitions, they usually have some form of “off.” Dance movies have dance-offs. There are marching band-offs. Also cheer-offs. In “Pitch Perfect,” they have many riff-offs. Just like Glee.

Obviously, if you love Glee, Pitch Perfect is for you, but the real reason to see this movie is Anna Kendrick. Kendrick’s an acting phenom. She was nominated for a Tony Award at the age of 12.

She’s in the currently running End of Watch, as violent a cop-flick as you’ll ever see, and here she is again in a piece of fun fluff. She knocks it out of the park with versatile, quality performances in both movies. Her natural charisma was immediately apparent in her breakout performance in 2009’s Up in the Air with George Clooney.

The highlight of the movie is Beca’s audition for the Bellas. She politely takes the audition monitor’s pencil cup, removes the pencils, and proceeds to do a sort of a percussive magic trick with it—flipping it, spinning it, drumming on it—all of which sets up a mesmerizing, syncopated beat. Layered over that, she croons a show-stopping song, thereby giving notice to Hollywood that she can also crush it as a musician.

Also of note are scene-stealing Rebel Wilson (Bridesmaids) as “Fat Amy,” and Hana Mae Lee who plays a wide-eyed, very quiet Bella member, whispering gems like, “I like to set fires to feel joy.” These are reminiscent of the running gag of inane asides spoken by the character Brittany Pierce in Glee.

Doesn’t that all sound a-ca-fun? Actually it’s surprising a-ca-fun. Even for a reviewer who’d normally take a Super Bowl truck commercial over a Broadway show tune any day. Actually he’s watched a bit of Glee. And he a-ca-liked it. Shameful. Well. One must stay current—film reviewing is a tough job, but somebody’s gotta do it.