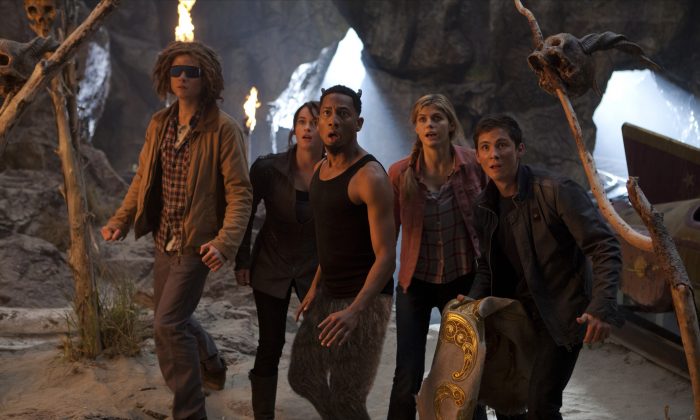 “Good artists borrow, great artists steal,” it’s been said. While not the most honorable of expressions, it’s true that there’s nothing new under the sun. Let’s call it a “re-telling.” If the re-telling is subtle enough that you can’t spot the influence, or if you do, you don’t mind—that’s generally good art.

I can imagine the archetypal cigar-chomping Hollywood mogul behind his desk hollering, “Get me kiddie product! It’s easy! Grab the ‘half-blood‘ concept from ‘Harry Potter’ and mash it up with Greek mythology!”

“Mash-up” is a musical term. Actually, just about everything existing in the world today is some form of mixed-up mash-up.

But is it good for kids? Let’s see.

Here’s the story: You’ve got your “Camp Half-Blood.” It’s a sleep-away camp for elite, good-looking, often spoiled 90210-type kids, except they’re all half deities.

Stanley Tucci plays god-of-wine Dionysus, a polo-shirted, goateed, functioning-alcoholic twit of a camp counselor, who doesn’t get that he ought not to say “whatever” all the time, like the campers do, because he’s not 14.

The movie kicks off with a flashback to one camper, Thalia, sacrificing her life by holding off a Cyclops attack. Father god Zeus then creates a tree out of Thalia’s body, which emanates an invisible barrier that protects Camp Half-Blood.

Then one fine happy-camper day, a mechanical bull (don’t ask) breaks the barrier and snorts around the camp, attempting to gore campers.

He has a trusty sidekick, an African-American faun named Grover—horns, cloven hoofs, short-ish Afro. (Fauns also come in Caucasian, by the way.)

They go on an adventure to find the Golden Fleece, which will heal the tree and revive the barrier.

Also joining them is the beautiful but prejudiced (against Cyclops) Annabeth, demigod daughter of Pallas Athena, goddess of wisdom. She inherited all that wisdom but still uses an iPad.

And they’re going to have some competition from the egotistical, über-brat child of war-god Ares, Clarisse.

They ride a hippocampus! (It’s a horse-mermaid-fish). They do battle on an awesome yacht!

They get sucked down the giant maw of “Charybdis,” a classic Greek sea monster.

They end up in its stomach, which, obviously unbeknown to Homer (Homer wrote “The Odyssey”) now also doubles as the Bermuda Triangle.

They shoot holes in Charybdis’s stomach with a big gun from a 1940s destroyer that got sucked into the Triangle!

This gets them to Polyphemus’s place; he’s the huge Cyclops who once tried to munch Odysseus. He’s got the Golden Fleece. He’s voiced by Ron Pearlman.

Polyphemus lives on Coney Island. That’s not its real name, but his island is an amusement park. Yep. It’s got a rollercoaster, Tilt-a-Whirl, and, um, Space Mountain.

Are we getting a sense of the overwhelming bad-taste mash-up-ness here yet? The kit-and-caboodle ransacking sellout geared to drain your kiddie dollars?

It’s like a city dump—you can find anything in there. But would you want to?

In the highly regarded Rudolf Steiner School curriculum, Greek mythology is taught in the 5th grade in all its solemn, pure pageantry.

Pictures are painted, poems from the Greek classics are learned by heart, costumes are made, and plays performed. That’s good stuff.

Can we find anything in “Percy” to ameliorate the mash-up tackiness? Are there lessons for the kiddies to learn? Bravery and selflessness are good.

Model-y Annabeth overcomes her Cyclops prejudice. Clarisse learns to play well with others. That’s pretty much it.

What’s the wanton ransacking of myths, the sullying of ancient Grecian aesthetics with modern Dude-iPad-Whatever culture, and the unashamed ripping off of the superior “Harry Potter” series called? Kitsch.

Wikipedia defines it: “Kitsch is a style of mass-produced art or design using cultural icons … unsubstantial or gaudy works … calculated to have popular appeal … cheap and marketable … mimics its immediate predecessor with no regard to ethics; it “offers instantaneous emotional gratification.”

C’mon Hollywood, give the kids some purity so they can regain some morals and some ideas about how to purify the mashed-up, kitschy, apocalyptic world we created for them!

Well, that was some admittedly overly serious self-righteous wind-baggery. It’s just a kids’ film, for goodness’ sake—why’s this reviewer getting so excited? Well, we care, folks!

But never mind, there are worse things you could take your kids to—like “Saw VIII” for instance. Plenty of people actually drag small children to that (expletive deleted).

Children will probably enjoy “Percy.” It’ll be a reasonably fun outing. A review of 3.5 stars for kids and 1.5 for parents equals: