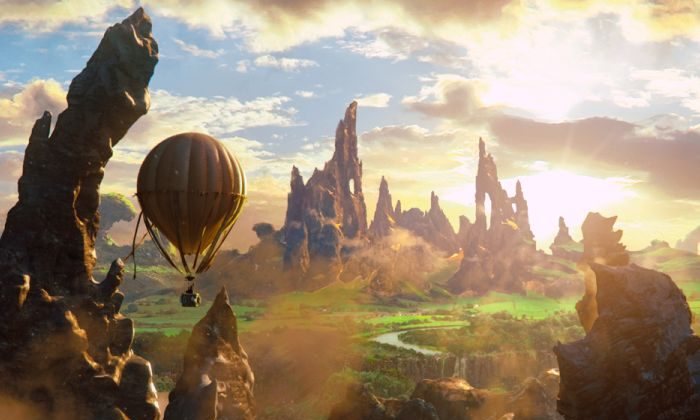 Oscar Diggs’s (James Franco) hot-air balloon sails over the landscape of the Land of Oz in the fantasy-adventure “Oz the Great and Powerful.” (Courtesy of Disney Enterprises, Inc.)
Entertainment

When this reviewer saw the original “Wizard of Oz” at age 6, he became terrified of the Wicked Witch and hid behind the couch. “Oz the Great and Powerful” is, by and large, a decent enough children’s film. But Sam Raimi is a former horror-film director, so certain images made the reviewer, at age 53, feel slightly in need of the couch again.

Of course, today’s 6-year-olds are used to seeing way worse. Still, a 6-year-old, ideally, should have a couch-free existence.

James Franco plays Oscar Diggs, a traveling-circus magician out of Kansas, circa 1905. Being a bit of a rake, he runs afoul of the resident strongman, escapes a beating by jumping in his hot-air balloon, and flies smack into a tornado.

As we all know, anything sucked up in a tornado in Kansas will get deposited in the Land of Oz. As in the original “Oz” film, Kansas is shot in black and white. Oz is multicolored. With multiethnic Munchkins. It’s a new era.

Oscar (Oz) meets sister witches Theodora (Mila Kunis) and Evanora (Rachel Weisz), who think he’s the coming of the prophesied wizard king. The wizard king is supposed to descend from the heavens to kill the Wicked Witch.

Oz wants no part of any witch-killing. But when Evanora shows him the massive gold pile that he would stand to gain, he decides that maybe he can hang out with them for a little while.

The script just isn’t that compelling. The film looks pretty great, but it’s ultimately flash over substance—which is a boredom recipe for anyone over the age of 6.

A couple of years ago, Hollywood delighted to discover that heretofore leading-man James Franco had serious comedic chops. However Franco’s Oz is a pretty close relative of the slacker dude he played in “Pineapple Express.” It would have been nice to see more of a rigorous approach to getting the character’s walk, talk, and attitude a little closer to the dust-bowl Kansas of 1905.

Michelle Williams as Glinda radiates goodness. Rachel Weisz is a good bad witch. And Mila Kunis, beautiful as ever, even under a foot of green makeup, needs a bit more vocal training. Witches scream a lot; it’s hard on the cords. The most endearing and compelling character in the movie is a little girl CGI porcelain doll, voiced by Joey King.

In the Broadway show “Wicked,” Oz fans learned the backstory of the Tin Woodman, the Scarecrow, and so on. “Oz the Great and Powerful” is the backstory of the Wizard. We learn the origins of his sham supernormal abilities, how he cons his way into the kingdom, and gets what is perhaps not rightfully his.

What loss must he pay for such gain? Well, he loses his slick, sleight-of-hand, and lying, cheating, huckster self. He uses his pedestrian magic skill set, such as it is, to save the kingdom. Balance would seem to be regained.

“Oz the Great and Powerful,” in 3-D, is good stuff for the under-8 crowd. Minus the bits of imagery that are just too scary for a 6-year-old. Bring a couch.