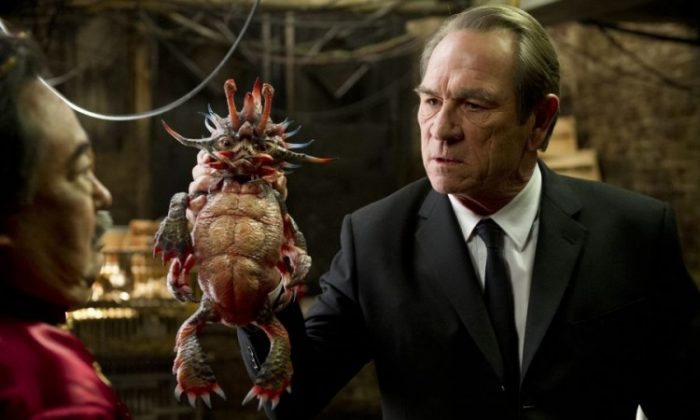 The first “Men In Black” was an instant comedic classic. The premise has always been fun: A CIA-like, covert ops agency that keeps tabs on bizarre alien life forms that live among us and runs pest control on the more dangerous and ill-intentioned ones. Its brother in concept was “Ghostbusters.”

The main foundation that the MIB movies stood on, however, was always the comic chemistry between leads Will Smith and Tommy Lee Jones. So what could possibly go wrong with this formula? Threequel-itis, that’s what. MIB 1 was great, MIB 2 not so much, MIB 3—just not cuttin’ the mustard.

Boris The Animal (Jemaine Clement of Flight of the Conchords fame) is a particularly hideous alien, replete with zipper-like skin harboring dart-throwing killer ticks, reminiscent of the nasty face-hugger larvae in the Alien film series. He gets broken out of prison with a smuggled time-travel device and goes back to the future looking for Agent K (Tommy Lee Jones), who was responsible for putting Boris on lockdown and lopping off an arm.

There ensues extensive time travel by Agent J (Will Smith) to help and protect partner K. The act of returning to the year 1969 turns up a younger version of Agent K, played by Josh Brolin. The whole movie is a time-travel bonanza, to eliminate the ghastly Boris before he can sic his ticks on Agent K.

The trappings are all too familiar by now: the black suits, the sunglasses, the cool cars, and the “neuralyzer” that erases ordinary people’s memories after they’ve crossed paths with the aliens among us. It feels like all these things have maybe overstayed their welcome a bit. What’s the phrase? “It’s so 2002.”

Whereas MIB aliens have always been freaky and somewhat disgusting in a friendly, fun sort of way, Boris The Animal’s ticks crawl around in the gore genre. The original MIB was kid-friendly, more or less, but Boris is pure gross-out and nowhere near as funny as “Edgar,” the giant galactic cockroach antagonist played by Vincent D’Onofrio in the original film.

Again, the best thing about a MIB film is normally the odd-couple chemistry of Smith the clown and Jones the straight man. The original had novelty, plus great situations like deadpan-meister Jones saying to an alien bug in full-threat display, “Put up your arms and all your flippers.”

Here, even the effusiveness of Smith and the taciturn stoicism of Jones have gone a tad stale. Not to mention other script clunkers such as: “You’re going to be late for your meeting with the Viagrans. They have a revolutionary new pill.”

To list some of the good things, while 3-D is rapidly becoming less and less interesting due to the way it skyrockets ticket prices, the 3-D effects are good here. There’s also the funny concept of Chinese restaurants secretly substituting alien fish species on the menu.

The best thing about the movie, however, is Josh Brolin playing a younger version of Tommy Lee Jones. Physically, they’re dead ringers for each other, and Brolin clearly had an actor’s dream experience of studying and interpreting Tommy Lee.

All in all, it looks good, it has good concepts, and it should have killed as a comedic film. One waits for the payoff. And waits. Boris is fairly gross. The rest of it is fairly boring.