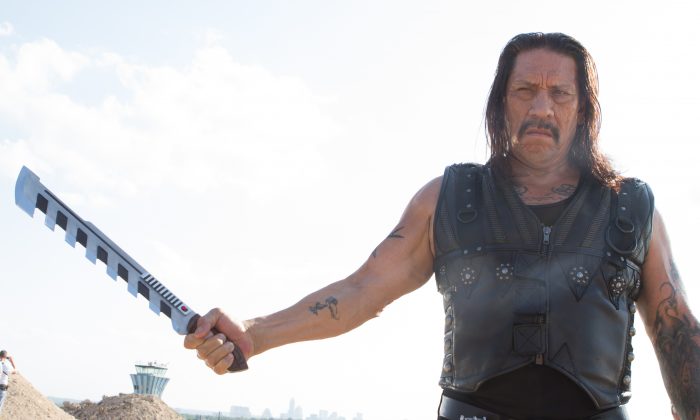 Machete Does What, Exactly?
By Mark Jackson
biggersmaller
Print

“Well, son, the genre harkens back to the bad old days of 1970s New York City, when Times Square was switchblade-dangerous, with XXX-rated movie houses as far as the eye could see.

“The place was crawling with winos and junkies, and that’s when men snuck into former burlesque theaters to watch triple-X and exploitation movies.

“Grindhouses offered blaxploitation, all-Bruce-Lee-all-the-time (which belonged to the exploitation subcategory of “chop-socky”), and zombie, vampire, and slasher movies. Just like everything we now regularly watch on TV.

“The common denominator of the grindhouse movies is a ’70s nonstop acid-rock or disco soundtrack, and frequent use of the “wah-wah” guitar pedal.

“Later on, Quentin Tarantino brought back the grindhouse movie. He liked everything about the 1970s, especially blaxploitation flicks and the ‘N’ word. He resurrected these things. We have him, and also his protégé Robert Rodriguez, to thank for bringing these lost cultural gems back to life.”

“So ‘Machete Kills’ is a blaxploitation movie?”

“No, it’s a Mexploitation movie. And while it does use Tarantino’s other favorite shock word, “mongoloid” (which he uses when Spike Lee excoriates him for using the ‘N’ word too much), ‘Machete’ generally refers to Mexicans as ‘Tacos,’ ‘Beaners,’ and ‘Pedros.’ But it’s okay! You know why? Because director Robert Rodriguez is Mexican-American.”

“So what differentiates the new grindhouse from the old?”

Add to that the fact that “Machete” star Danny Trejo is an actual ex-convict, and you’ve got something nice and schlocky and train-wrecky.

Trejo is Machete, former Mexican Federale turned vigilante—he who will not die. The bad guys (“bad” as in, “worse than Machete”) hang Machete high and kick the stool out, but Machete just glares at them.

Then, the president (billed as Carlos Estevez) orders Machete cut down from the gallows pole. He needs him to save the world. But let’s not get ahead of ourselves.

First, Machete has to find a schizophrenic drug kingpin named Mendez (Demian Bichir), who has a killer nuke missile-bomb wired to his heart. If Mendez dies, Washington D.C. explodes.

Machete has to smuggle Mendez the Madman across the U.S./Mexican border so somebody can disarm that bad boy.

There’s also a storyline about Mel Gibson’s bad-guy character, Voz. After seeing how easily Machete dispatches his cloned super-soldier (with a Swiss Army knife-type machete), Voz wants to hire Machete himself, for cloning. But guess what? Machete don’t clone.

Throw in lots of blood, and many, many Machete machete-choppings. Add quite a bit of death by helicopter (you don’t want to know), and a trifecta of scantily clad, beautiful women: Sofia Vergara, Michelle Rodriguez, and Amber Heard. One of them owns a Gatling-gun brassiere (hopefully air-cooled).

Turn up that acid-rock soundtrack, and that’s pretty much “Machete Kills.”

Sheen’s life has been off the rails lately, but he’s fun to watch. Gibson doesn’t have much material to work with, Antonio Banderas is always funny when he gets to speak Spanish, and Cuba Gooding Jr. is wasted (as in underused).

The revelation here is Lady Gaga—she’s got mega-movie-star charisma during the tiny time she’s on screen. She here serves notice to the world that she’s similar to Madonna in music career trajectory only.

There’s going to be more Machetes. Oh yeah. Up next will be “Machete Kills Again … In Space.”

There would appear to now be a market for resurrected grindhouse. Why? Well, maybe—ahem, “neo-grindhouse” has become a “genre” because Tarantino’s Midas touch has turned grindhouse into … art? Grindhouse does sort of sound like “arthouse”…