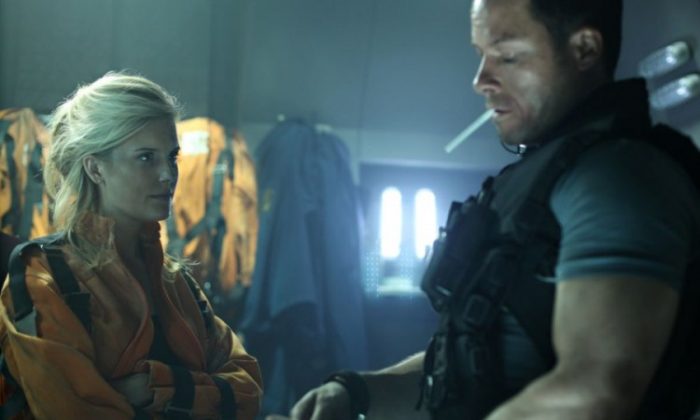 Maggie Grace and Guy Pearce in the science fiction action-thriller 'Lockout,' a film about a wrongly convicted man who is offered freedom if he can save the president’s daughter from an outer-space prison. (Open Road Films)
Entertainment

If you loved Aliens,  Battlestar Galactica,  Blade Runner, Die Hard, Mission Impossible, Pulp Fiction, Robocop, Speed, and Star Wars, chances are that the fairly inappropriately PG-13 rated Lockout might also interest you. It’s a piecemeal work of all of the above. The chances are, also, that you might therefore find it to be thoroughly clichéd and utterly predictable. But it’s not boring. That’s largely thanks to Guy Pearce.

The year is 2079. Pearce plays buff, tough, terminally wisecracking CIA agent Snow, who gets bogusly framed for alleged espionage against the U.S. He’s headed out to serve a 30-year sentence in a cryogenic deep-freeze pod on a satellite-like maximum-security prison in outer space, called MS ONE.

The president of the United States’ daughter (Maggie Grace), visiting MS ONE to determine the state of its humaneness, is taken hostage in a prison riot. The inmates have requests and conditions or they’ll forcibly eject a hostage out of the airlock every 3 minutes. Oops.

The presidential powers-that-be furrow their brows and mull over whether to send the LOPD (Low-Orbit Police Dept.) to MS ONE and blow the whole place up, or send in one man to save one hostage. Guess which man and which hostage?

Agent Snow’s dilemma: to take the adrenaline-amping mission to save the president’s very pretty daughter and gain his freedom, or to be put into an exceedingly boring deep freeze for a long, long time—that is the no-brainer question.

There are some inmates with the requisite Scottish accents that have become so popular since Braveheart. There’s a seemingly blatant rip-off of the floating-over-the-spinning-turbine scene from Mission Impossible, Ghost Protocol. There’s a gross medical rescue straight out of Pulp Fiction. Cover your under-13-aged kids’ eyes.

All that space paraphernalia. All those CGI spacecraft with big guns on them. All the gun-toting tattooed bad guys. All the pressure-locked space gates that open and shut with a hiss. All that stealthy crawling about in airshafts and heating ducts. Haven’t we seen it all and perhaps enough of it by now? Apparently we have not. Apparently we never get tired of “Die Hard” on a space station.

While this movie is an endless cobbling of visual images that we’ve seen ad nauseam since Star Wars, the narrative keeps the tension fairly high and won’t lose your attention even though, as mentioned, it’s clichéd and predictable.

It’s a classic action-packed fun-house ride of the laidback-under-pressure hero saving the visually arresting but spoiled damsel, and their resultant stress-induced bickering-to-bonding “relationship.”

While Lockout will definitely be locked out of next year’s Oscar-running, it would be a cheap shot to call it cheap entertainment. However, if it’s predictable popcorn entertainment you want, just make sure that it’s cheap by waiting for it to come out on Blu-ray.