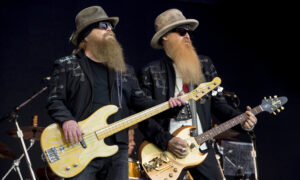 “Bruce Lee is Kung Fu Elvis,” I said, in my review of “The Grandmaster.” Well, if Bruce was Elvis, Bruce’s teacher, Ip Man, was more like blues ground-breaker Robert Johnson—more original, more legendary, and until lately—more obscure.

In the first “Ip Man,” he fought the Japanese. In “Ip Man 2,” he fought the British. In “Ip Man 3,” he fights Mike Tyson. Well—the shady property-kingpin Tyson tries to pretend to be. Tyson’s acting is, of course, ridiculous. The fight scenes? Stupendous! But don’t let the fact that Iron Mike didn’t attend Yale School of Drama deter you.

Beauty in martial arts can produce the same emotional response as a great leap in ballet, or that “Marriage of Figaro” aria in “The Shawshank Redemption.”

Acting is one of the seven great arts; boxing is one of the great martial arts. Tyson can no more stand on a stage with Sir Laurence Olivier and declaim Shakespeare, than Olivier could stand in a boxing ring and trade jabs with the erstwhile heavyweight champion of the world. Both are artists, though. We’ll come back to Tyson.

The setting is Hong Kong, the year 1959, and somehow, big, bad apparently American ex-pat Frank (Tyson), who happens to look like one of the greatest boxers of all time, and happens to speak some Chinese, well, his goons start leaning on a local school. “Sell us the school!” “No!” They beat everybody up. The police don’t help; most of them are in Frank’s pocket.

But Ip Man’s kid goes there; Ip Man to the rescue! He does sentinel duty at night, which makes his wife quietly crazy, but he’s in do-gooder, neglecting-his-family-for-others mode, which is a lesson he’ll have to learn.

While on guard duty, Ip meets fellow Wing Chun kung fu practitioner Cheung (Zhang Jin), whose bullying son goes there as well (Wing Chun is the kung fu style Bruce Lee made famous). The two boys eventually get into it of course, and have a schoolyard dust-up. Difference is, Ip Man’s kid calls his dad “dad,” while Cheung’s kid calls his dad “shifu” (master/teacher). Uh-oh. What kind of man calls his son “disciple?”

Ip Shifu, on the other hand, has a school and commands a high degree of respect. This can only lead to one thing: jealousy. What else? A wicked man is born of jealousy, they say, and jealousy and competition fuel most wuxia (martial arts) films.

So Cheung goes on a rampage, hiring a local reporter to be his photographer, challenging and smacking down the local shifus of other kung fu styles, one after the other, which ultimately leads to a challenge with Ip Man. Cheung declares himself the keeper of the holy Wing Chun purity, sets up a big showdown with Ip. And waits. And waits.

The energy that enables supernormal abilities is built up through elevating one’s moral character.

There was no Nintendo or “Wreck-it Ralph” back then; you had to wreck it yourself. So people would run around in crowds, hither and thither, to see whose kung fu was better. And things of that nature.

As mentioned, whenever Tyson utters a line in that now-famous, high-pitched, lispy voice, you (naturally) can’t take it seriously. However, when the fight’s on, and we get an Iron-Mike-opponent’s-eye-view of the unleashed behemoth on attack; the size and power of a rhinoceros combined with the lightning bob/weave moves of a mongoose—it’s like a horror movie.

If you’re not familiar with Muay Thai, it’s sort of like karate plus boxing, plus knees, plus elbows, with massive, horned callouses built up on hands, feet, and shins. Incredibly lethal. Ip’s fight with a Muay Thai psychopath, in an elevator, with his wife in there too—is electrifying.

Lastly, Wing Chun versus Wing Chun—wow. They run through some Wing Chun weaponry. Knife-blade on knife-blade produces a metallic scream that makes the children cry, and when Cheung pulls off an eye-poke, Ip shifts to supernormal abilities to combat the temporary blindness. This is some high-level kung fu. Why can he do this? The energy that enables supernormal abilities is built up through elevating one’s moral character. Ip Shifu says so in the movie.

I won’t say who wins, but Ip, post-fight, says that there’s nothing more important than having the love of your life by your side. That may be true, but these three fights are the type that make you laugh from sheer awesomeness. And also cry. Just a little bit. “Why am I shedding a tear at the awesomeness of this fight?” Because it’s art. Beauty in martial arts can produce the same emotional response as a great leap in ballet, or that “Marriage of Figaro” aria in “The Shawshank Redemption.”

Ip Man only became famous because of his most famous disciple, Bruce Lee. Danny Chan, who played Lee in a 2008 TV series called, “The Legend of Bruce Lee,” reprises the cliché, constant nose-thumbing characterization, which is seriously over the top for a former rabid Lee fan, but new audiences won’t know the difference. At least they didn’t use the computer generated Lee that had been discussed.

Lee lived there too. The little taste they offer us of the Bruce/Ip dynamic is enticing. My guess is “Ip Man 4” will be all about that. That should be enough time for Danny to tone down the overt Bruce-isms and become excellently subtle.