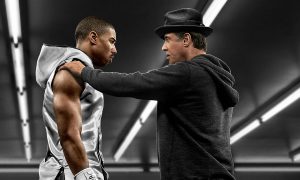 Vehement fist-pump! Yes!!! Rocky number 7 rocks!! It would have been such a shame had “Creed” not rocked.

Sylvester Stallone can bow out gracefully now. The same thing was happening to the Rocky franchise that happens to boxers—they don’t know when to quit.

The Philly cheese-steak-tasty “Creed” brings it all full circle; it hands off the generational torch and tells this story that’s much needed in America today: the second, late-life male rite-of-passage. That is, where Rocky Balboa finally lays down the warrior sword, and takes up the elder staff.

Young Adonis Johnson (Michael B. Jordan) was born out of wedlock, never knew his famous father, the former undisputed heavyweight champion of the world—Apollo Creed (Carl Weathers, of the first four “Rockys”).

His mom died early, so Adonis was shunted through LA foster homes and juvie, picking up a fierce survival creed. “He fights,” it’s explained. Apollo Creed’s widow (Phylicia Rashad) finally finds and raises him, with plenty of opportunity and upward mobility.

But the apple didn’t fall far from the tree. We know this because both father and son have Greek-god names starting with the letter “A.” Adonis may be an investor by day, but teaches himself boxing by night (YouTube tutorials, a la MMA fighter Jon “Bones” Jones, perhaps?), and goes skill-sharpening in Mexican matches.

Like fighter Manny Pacquiao’s real-life hero’s journey to Manila, for Adonis, all roads lead to Philly. Why? To find a master of the boxing trade, an older male who believes in him. Cue “Adrian’s” restaurant.

What else would it be named? “I don’t do that stuff no more,” says Mr. Balboa, the elderly restaurateur. Sure he doesn’t. He must first be coaxed out of retirement by splendiferous talent. Adonis has that part covered.

Finally we get to the parts we’ve been waiting for: boxing training montages. There’s no iconic glugging of 12 raw eggs, which was something nobody’d ever seen before in 1976, but there’s plenty of old school chicken-chasing, grizzled gyms, and encyclopedic boxing-lore-spouting, and mitt-hitting codgers.

Then, brash, ultimately untested “Baby Creed” (as one Philly gang member calls him, to the immediate detriment of his face) jumps in the ring and challenges, “Anybody who can hit me in the face gets the keys to my ‘stang!”

Suddenly, imaginary fight-stat billboards light up, next to this or that boxer-predator: “Height, weight, reach, perfect record, many KOs” It’s like entering the Bronx Zoo big-cat house and reading, “Siberian tiger, largest cat in the world, 700 pounds.” You say, “Dang.” Adonis better think twice about proffering his ‘stang. “Welcome to the jungle!” as Axl Rose sang.

There’s a top-notch, every-look-and-word-counts romance with girl-next-door Bianca (Tessa Thompson, from “Dear White People,” in a star-making role). She’s a soul-singer-songwriter who holds court locally and crafts her songs neighbor-disturbingly loud. I won’t give away the reason why.

There’s Rocky’s touching cemetery pilgrimages; taking his not-very-well-hidden folding-chair out of a nearby tree, pulling up a seat to Paulie and Adrian’s graves, to talk to, confess, read the paper, and generally hang out with his deceased wife and best friend.

“My heart isn’t into this any more. … It’s time to move on with my life and be a father, take care of my children.”

Then a not-so-Rocky thing: our old friend with the exact same hat (different color) starts to feel … not himself. Doctor’s diagnosis is not good. But Adonis isn’t going to fight unless Rocky fights too. Lots to fight for. Adonis, to prove that he “wasn’t a mistake;” Rocky for life itself.

“Creed’s” the kind of gritty, cozy, workaday tale we love in America, with more than a little in common with the hugely popular MMA fight-film “Warrior,” also set in Philadelphia.

Something about making the commonplace sing, like backyard shots of trains moving in the near distance, seen over neighboring fences, and the proudly low-rent seediness, beloved of the fighter-pilots in Tom Wolfe’s “The Right Stuff,” and by boxers the world over.

And of course the score and soundtrack must rock. It must hip-hop, more accurately. Ludwig Göransson’s hip-hops, while layering in some of the old Bill Conti original “Rocky” themes, as well as sprinklings of John Legend and The Roots.

Interestingly, boomer-generation Italian Philly, where Rocky grew up, is now millennial African-American. The first Rocky had the “Italian Stallion,” an overwhelming underdog, go up against African-American Apollo Creed’s iconic champ. Creed made fun of Rocky’s working-stiff Italian palooka-ness, while giving him a once-in-a-lifetime title shot, as a publicity stunt.

“Creed,” puts a highly educated African-American underdog up against a working-class Brit-bloke champ, who insists Adonis take his dad’s famous name in return for getting a title shot—also as a publicity stunt.

Moreover, champ Conlan trash-talks up the fact that Adonis’s famous trainer is the real-deal, whereas young Creed’s own silver-spoon upbringing is suspect in terms of true toughness.

It’s clear Stallone loves this character dearly. Rocky Balboa is his baby, after all. He made him up, breathed life into him, and Rocky made Sylvester Stallone immensely successful.

What we love about Rocky is that he was a sweetheart who’d give you the shirt off his back—all heart. “Creed” is the realest Stallone’s been as an actor, probably since … well … Rocky.

All the acting is superb, and Michael B. Jordan, if he keeps this up, might make a name for himself that lives up to that other Michael Jordan (also known for quality performances).

Rocky’s segue from warrior to mentor and is as touching as Mike Tyson’s words after his last fight, “My heart isn’t into this anymore. … It’s time to move on with my life and be a father, take care of my children.”

As Rocky said after the big fight, “Everyone here knows they’ve seen something special.” What we saw was Creed live up to his father’s name, dig down deep, come up with true toughness, and become a man. But it was only possible because the former Italian Stallion believed in him. That’s taking up the elder staff.