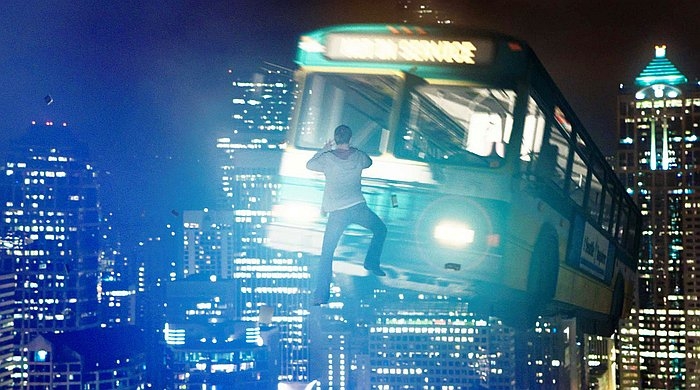 Alex Russell in “Chronicle,” has a close encounter with an airborne bus and uses his telekinetic abilities during a fierce battle above Seattle. (CGFactory—TM and Twentieth Century Fox Film Corporation)
Entertainment

Glowering into the camera, a teenager slowly clenches his hand into a fist. Behind him, in sync with his hand’s movement, a car crumples and implodes, metal grinding and glass detonating. High-level telekinesis. He’s an apex predator with supernormal abilities. You are not.

The fun new movie “Chronicle” might conceivably have been pitched to the studios thusly: It’s a found-footage film like “The Blair Witch Project” and “Cloverfield,” combined with “Bowling for Columbine.” Instead of witches, monsters, and guns, you’ve got supernormal abilities in the hands of a teen outcast who gets punched at parties; it’s sort of like “Carrie” with shaky-cam and cool CG.

Movies and TV shows about superpowers are all the rage these days: “X-Men,” “Heroes,” Marvel Comics and DC Comics movies, cartoon movies like “The Incredibles,” and so on. “Chronicle” is the next logical progression toward realism.

He gets smacked around at school, the movie camera gets kicked; he is roundly ridiculed. But it’s a hardy camera, and he’s an exceptionally stubborn pariah, so the filming continues.

While Andrew is hanging out at a party with his much cooler cousin Matt (Alex Russell) and the high school’s way, way cooler “big man on campus,” Steve (Michael B. Jordan), they discover a strange subterranean tunnel emanating bizarre noises. Being teenagers, they jump into the tunnel pronto to explore. The spelunking excursion apparently rubs off some inexplicable phenomena on them, accompanied by heavy nosebleeds.

Lego construction sans hands soon leads to being able to shove cars around a parking lot using only mind-intent. Minor blips of levitation quickly evolve into wild, euphoric games of football in the Boeing 747 fly-zone. The annoying amateur shaky-cam evolves into a smooth-action, no-hands, teleportation-cam.

In some of the movie’s funniest scenes, the boys play pranks using their supernatural abilities. Hiding in department store aisles, they chase terrified children in the toy section with flying teddy bears, yank people’s chewing gum out of their mouths, and send shoppers on wild goose chases after their shopping carts.

After being disingenuously passed off as exceptional magician talent, these super-normal powers are rapidly converted into high school fame for Andrew. However, rapid fame doesn’t automatically improve social skills, and he soon finds himself in rejected loser mode once again.

With an overbearing drunk for a dad, a sick mom, feelings of shame, a creative type’s self-focused personality, and mind-blowing superpowers, Andrew’s psyche is a dangerous breeding ground—especially when he starts tinkering in his mind with the concept of an “apex predator.”

When bully payback arrives, it’s pretty telekinetically awesome and scary. David Bowie’s “Ziggy Stardust” is inspired soundtrack music to the ensuing mayhem, being, as it is, the homage without peer to misunderstood misfits everywhere.

If the ability to develop supernormal abilities as depicted in this film were possible, the well-known phrase “absolute power corrupts absolutely” has never been more vividly demonstrated. It would be time to be very afraid.

As stated above, “Chronicle” is the logical progression toward realism in the portrayal of supernormal powers. Who knows, perhaps the final step in this progression will be documentaries!