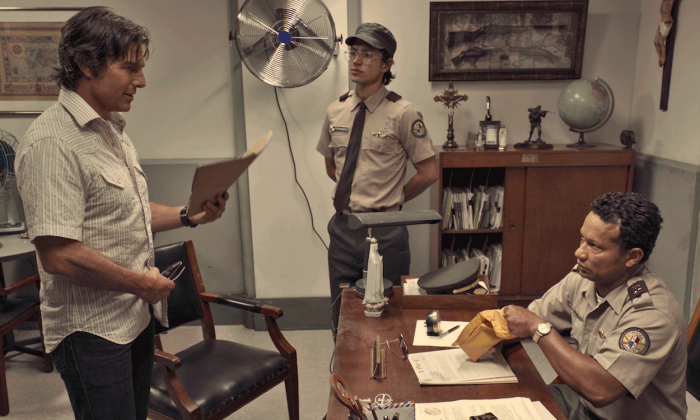 Tom Cruise never gets old. Not the way Cruise’s female fans mean that (“Sigh. He just never gets old.”) The man’s face ages, and yet he does not. Even with wrinkles and puffy eye-bags, Cruise’s 55-year-old self is miraculously, somehow, still 30.

Cruise landed a good role here, for his perennial boyishness. Barry Seal is a former commercial pilot blackmailed by the CIA into flying a spy plane (which caught him smuggling Cuban cigars), and strong-armed by the scarily savvy Medellín cartel (which caught him flying over their country, taking pictures) into becoming a servant-of-many-masters, drug-smuggling gun-runner extraordinaire.

It’s a funny movie (cute is a better word). Cruise’s comedic acting has been long underrated, despite his stellar straight-man turn in “Rain Man.” It was really only after he smashed his pretty-boy image with the role of the fat, bald, hairy-armed movie executive Les Grossman in “Tropic Thunder” that people’s jaws dropped in amazement at Cruise’s clowning.

The only problem with this movie—and it is a formidable one—is that Universal Pictures uses Cruise’s star power and comedic chops to sell a movie about selling one’s soul for filthy lucre, in order to gain filthy lucre for the studio.

Maybe that sounds a bit high-minded and shrill. I mean, sure, it’s breezy and funny. But the death-dealing Medellín cartel and the more Machiavellian machinations of the CIA, especially regarding the ’80s Iran-Contra scandal, are decidedly not-funny subject matter.

An argument could be made that all the lying and spying (bad!) were geared toward helping stamp out the spread of communism (good!). Therefore, the end justifies the means, and Seal’s life could be seen as a form of martyrdom—but that would be a bit of a stretch.

“American Made” is basically a mash-up of “Air America” and “Goodfellas,” with Cruise using his own piloting skills to do stunt work. Like Cruise, Seal was an adrenaline junkie if there ever was one. He enjoyed faking turbulence in the TWA cockpit to rouse his snoring co-pilot, for giggles.

So when he is camera-apprehended smuggling expensive cigars, and then carrot-dangled by the CIA with the concept of flying a smoking-hot spy plane for the agency as a get-out-of-jail-free card, it’s kind of a no-brainer for the slick Seal.

Domhnall Gleeson, son of actor Brendan Gleeson (he of the giant blonde beard in “Braveheart”), plays Schafer, one of those cheerfully cutthroat, amoral CIA agents who “runs” Seal. And since he answers Seal’s plea for a raise (so as to better take care of his family) with a smarmy-but-cold “You’ll figure it out,” he can’t very well complain when Seal starts exporting cocaine from Colombia.

Seal is like a latter-day Amos Moses of Jerry Reed’s 1970 song: “Louisiana law gonna get ya Amos! It ain’t legal huntin’ alligator down in the swamp, boy!” It also ain’t legal bombing Louisiana swamps with orange life jacket-wrapped cocaine bundles, Barry. But it is funny.

Just as the covert aerial photography is going well, the up-and-coming Pablo Escobar (Mauricio Mejía) and his Medellín boys, like hyenas getting in on a lion kill, apprehend the hapless Seal yet again and add a second and third cargo shipment: drugs and guns.

Seal is a talented pilot, as evidenced by his “audition” take-off from a too-short Medellín boys’ jungle runway, where his prop-plane mows the treetops. And as everyone soon discovers, Seal is a crack businessman, too. He recruits a team, which results in fourth and fifth cargo shipments: cash and people. Seal’s soon flying Contras to Arkansas (where his family lives) to train-up to fight the Sandinistas.

Who knew having too much cash could be such a monumental problem? You have to bury it in he backyard, stuff every last nook and cranny full of it, and yet it still leaks out and wafts around. Also funny.

What was all that about Iran-Contra and Ollie North, and the obfuscation of top-level, government-sanctioned drug-trafficking in the covert war on communism, again? If you’re vague on that period of time, it’ll come back to you vividly here.

As the law-enforcement agencies (FBI, DEA, ATF, not to mention the local sheriff) descend upon Seal’s Arkansas abode, Seal’s still got that get-out-of-jail-free card, but it’s now become gilded with righteousness: He is the Reagan administration’s holy-war pilot where the Contras versus the Sandinistas are concerned. Can’t touch this.

Much like prohibition liquor-running in the South evolved into NASCAR, Cruise and a lighthearted script full of joviality spins Iran-Contra into the wink-wink, naughty-naughty, boys-will-be-boys kind of hindsight glow we Americans enjoy shining on our culture and heritage.

But should we grant Seal an induction into our curiously whitewashed, American pop-culture hall of notoriety, to stand alongside the likes of Butch Cassidy and other romanticized criminals? Most of this movie is the fun-house version of the real Barry Seal; the director says so. But who really pays attention to that? A month later, everyone will think they know who the real Barry Seal was, and they’ll think he was kinda funny, shrewd, and also dumb. Sorta harmless.

Should the full scope of the sordid subject matter contained in “American Made” get spun this much for giggles? As Fleetwood Mac put it, “It’s not that funny, is it?”