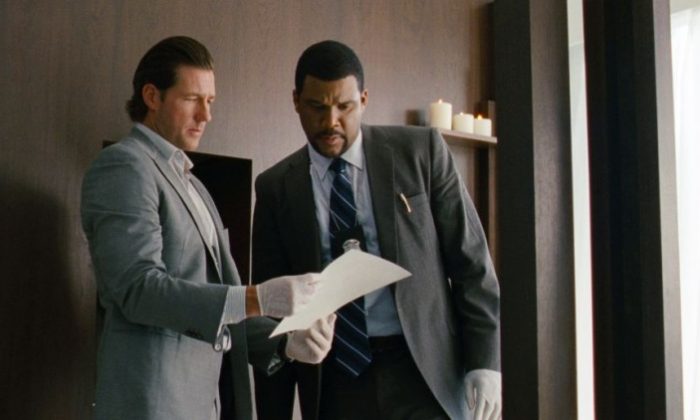 John C. McGinley in the myster-thriller “Alex Cross,” a film about a detective who vows to track down the murderer who killed one of his family members. (Sidney Baldwin/ Summit Entertainment, LLC)
Entertainment

At first, you hear the name Tyler Perry and you think “Madea” because Perry made his reputation with, count them—12 movies—playing that character. And then you hear that “Madea” will now play a cop in a thriller and you think, “No way.”

Well, yes way, it turns out. Pretty much. At first the tendency is to snicker because who wants to take Madea seriously? But Perry soon announces his dramatic presence with authority, and everyone breathes easier.

Unfortunately, putting Perry in Alex Cross is like putting a stock-car engine in a go-kart. It’s too skimpy a vehicle, and he runs the wheels off it.

Cross (Perry) is a Detroit homicide detective with a Ph.D. in psychology. He’s got well nigh Sherlock Holmes observation skills. Cross and partner Tommy (Edward Burns) are after a sadistic serial killer (Matthew Fox).

The killer, nicknamed Picasso since he likes to make Picasso-styled sketches of his victims, is on a mayhem rampage. Said rampage appears to be headed in the direction of one Leon Mercier (Jean Reno), a man of great wealth, who alerts Cross to his pending Picasso predicament.

Picasso then kills someone close to Cross, making it personal, and so the chase begins. You know the rest of the story. The only question becomes—after Cross goes home and locks, loads, and straps on an enormous number of guns—can he contain his righteous rage and not be contaminated by Picasso’s poisonous personality?

As mentioned, the main problem with this film is that it’s just not up to carrying Tyler Perry’s dramatic debut. It’s got bad acting, treacle-y music, loads of clichés concerning the black middle class, and garish amateur-hour lighting.

Come to think of it, that actually all adds up to the perfect vehicle for Perry’s coming-out party in light of the Madea milieu, but Perry’s got surprising talent, and it would have been nice to see him better utilized by a director with a more discerning eye for actor interaction.

Every scene declares, “This is a movie set and these are all actors pretending to be cops.” You don’t for a second suspend your disbelief that any of them can do that job, which is a shame because Ed Burns grew up in a police household and is highly capable of an authentic police officer portrayal.

Fox’s killer-creep could have been a contender. It’s a character that any actor would relish; he gets to diet down to half his weight, be an unbeatable illegal mixed-martial arts fighter, and make lots of scary faces. A well-directed, gritty, believable rendering of this film would have made Fox’s performance one for the psycho-killer record books.

Here’s a good line. John McGinley’s police chief, on hearing the above diagnosis: “So we’ll go with ‘a psychopathic killer with a narrow focus.’ That’ll comfort the citizenry.”

A popular current photo meme has Perry-as-Madea handing a current presidential candidate a “humble pie” that she’s baked for him and saying, “It’s o-vah for you!” Luckily for Perry, the dismal direction on display in Alex Cross won’t mean it’s o-vah for his dramatic thespian aspirations.