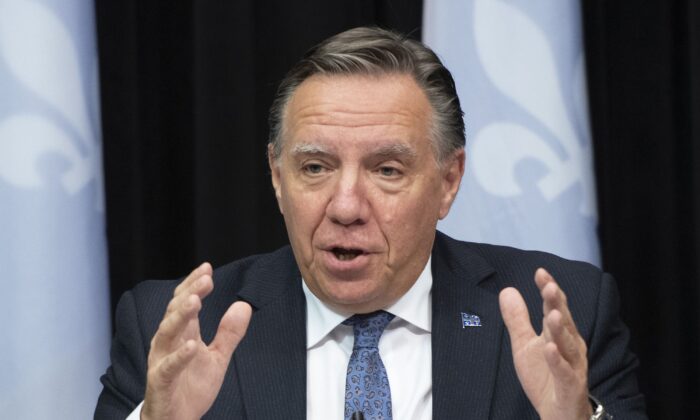 Quebec Premier Francois Legault speaks at a news conference at the legislature in Quebec City on Sept. 23, 2021. The province has postponed mandatory vaccination for health-care workers until Nov. 15 due to the impact it will have on services. Meanwhile, Quebec’s college of physicians says all doctors must be vaccinated or have their licences suspended. (The Canadian Press/Jacques Boissinot)
Canada

‘Most Disturbing’: Doctors in Quebec Forced to Vaccinate to Keep Practising

Quebec doctors who are not vaccinated for COVID-19 will be prohibited from practising, the province’s college of physicians has announced, leading some physicians to decry the move as going too far.

On Sept. 29, the day prior to the announcement, Collège des médecins du Québec (CMQ) published an “important” notice on its website to remind its members that “no examination, treatment, or medical intervention, required or not by the health status of the individual, can be accomplished without the free and informed consent of that individual.”

The next day, however, the CMQ decreed that COVID-19 vaccination is mandatory for physicians. “For the Collège des médecins, vaccination is an ethical duty and a social obligation,” it said. “It’s the scientifically tested method to protect the entire population.”

The decree said doctors who haven’t complied by Oct. 15 will see their licences suspended and won’t be allowed to perform consultations, including remote consultations, or follow up on exam or lab results. According to the CMQ, 97 percent of Quebec physicians are vaccinated.

On Oct. 13, the Quebec government extended its initial Oct. 15 deadline to Nov. 15 to require all health-care workers to be vaccinated, due to the risk of an already overstretched health system being unable to withstand losing an estimated 22,000 workers who are either unvaccinated or not fully vaccinated.

Dr. Paul Saba, a Quebec family physician who says he’s a strong proponent of vaccination, believes that some form of accommodation is needed for those who don’t wish to be vaccinated. This is in order to avoid the health system’s collapse, which could lead to preventable deaths, he said.

“There’s even talk of some hospitals being shut down—this is very distressing,” Saba told The Epoch Times, noting that he’s been writing articles to “sound the alarm” about the situation.

“I’ve heard comments from different people that these people [unvaccinated health-care workers] are the cause of all our problems. They’re not the cause of our problems—they’re heroes who’ve been working in the health-care system, often without even personal protective equipment.”

Saba says it “doesn’t make any sense” for doctors not to even be able to do remote consultations. Another accommodation he suggests is for the unvaccinated working in health-care facilities to be regularly tested.

The Epoch Times contacted the CMQ with a number of questions related to ethical issues raised by critics, but it received no response.

Patrick Phillips, a doctor in Ontario, took to Twitter to criticize the CMQ’s decree, saying it is “violating the most basic principles of patient safety and autonomy they were created to protect: Free, uncoerced, fully informed consent.”

Phillips then added a thread where he posted a notice of liability issued to the CMQ by Dr. Roland Léger, who practises in Ottawa but is also licensed in Quebec. The Epoch Times has confirmed the authenticity of the notice.

Léger writes that he has practised in general medicine and family medicine for almost 40 years but now feels he has been “plunged into a global Institutional Betrayal of monstrous proportions.” He notes that the global recovery rate from the virus SARS-CoV2 is over 99 percent and that he and his wife, also a doctor, have a “fundamental human right to refuse the vaccine,” pointing to the Canadian Constitution and the Canadian Charter of Rights and Freedoms.

“Our experience and conscience is telling both me and my wife that we should definitively not take this vaccine,” he writes. He asked whether someone at the CMQ—whom he doesn’t identify—is “willing personally, without affiliation to the College, to sign and take full legal responsibility” should he or his wife experience side effects after receiving the COVID vaccine.

Phillips, who tweeted Léger’s notice at the latter’s request, told The Epoch Times that Quebec’s mandate is one of the most stringent among all the provinces.

“[The CMQ] goes far beyond Ontario, where a lot of individual hospitals or long-term care homes are mandating the vaccine but you can still practise in the province, you’re not losing your licence,” he said.

“What’s most disturbing about this is that medical colleges … are created for patient safety. They’re created to protect individual patients from exactly what they’re doing right now. To force somebody into a medical treatment—especially a novel one with no long-term safety studies—is kind of unthinkable,” he said.

Leger said he’s heard from his contacts in Quebec that, as things stand, as many as 600 doctors may lose their licences.

Saba points out that by going with the approach of reasonable accommodation, “we’ll do more benefit to our health-care system than harm.”

“We have vaccinations, and in Quebec we have herd immunity of our health-care professionals,” he said. “So to get the roughly 5 percent of people who are not vaccinated—you’re throwing out the baby with the bathwater.”