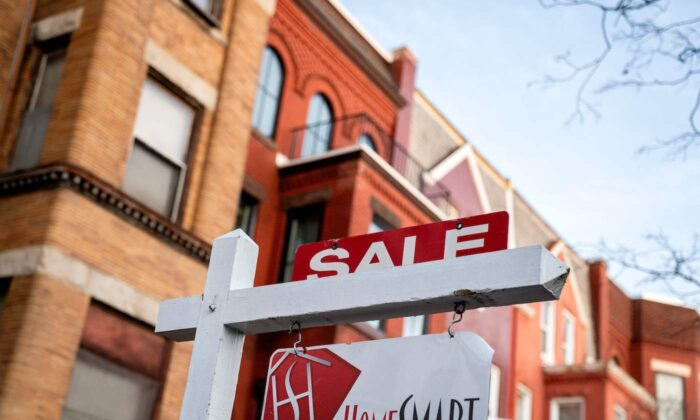 A for sale sign is displayed in front of a house in Washington, D.C., on March 14, 2022. (Stefani Reynolds/AFP via Getty Images)
US Real Estate

Mortgage Rates Rise, With Monthly Payments Up Around 30 Percent From Last Year

Average long-term U.S. mortgage rates continue to climb again this week, with interest rates for key 30-year mortgage loans hitting their highest level since 2009, according to Freddie Mac on May 12.

The news adds more financial strain on potential home buyers, as the competitive spring and summer markets heat up.

Meanwhile, the average rate on 15-year, fixed-rate mortgages, which is popular among those refinancing their homes, dipped to 4.48 percent from 4.52 percent last week and was at 2.26 percent a year ago.

The five-year adjustable rate had an average of 3.98 percent, up from last week’s 3.96 percent, while it averaged 2.59 percent a year ago.

The Federal Reserve on May 4, raised its benchmark interest rate by 50 basis points and has signaled five more rate hikes to fight record inflation.

Federal Reserve Chairman, Jerome Powell, who was confirmed for the second time to his position on May 12, reconfirmed the new policy.

Although the central bank does not set mortgage rates, its rate-setting policies do indirectly have an effect, as the move has increased rates for mortgages, credit cards, and other loans for individuals and businesses.

The Bureau of Labor Statistics Consumer Price Index from May 11 showed inflation easing slightly in April with a rise of 0.3 percent after months of major increases.

Consumer prices rose 8.3 prices in April from a year ago, slightly below the 8.5 percent year-over-year record surge in March, which was the highest in 41 years.

“Monthly payments have increased by more than 50 percent in just four months because of higher mortgage rates,” said George Ratiu, a senior economist with Realtor.com.

“While everyone is shocked by inflation of 8.3 percent, rent increases of 17 percent, and home price increases of 14 percent, the impact of higher mortgage rates is even greater.”

The bureau released on May 11 the April Producer Price Index showed that U.S. producer prices soared 11 percent last month from a year earlier, which is bad news for consumers and businesses for the months ahead.

Many home buyers on fixed budgets who are on the hunt for housing have been pushed out of the market after suffering months of rising costs for everyday necessities due to rising inflation.

Rising mortgage rates which are currently at 5.5 percent, are compounding that problem.

However, mortgage applications increased 2 percent from one week earlier, according to the Mortgage Bankers Association, while the refinance index fell 2 percent from the previous week and was 72 percent lower than the same week one year ago.

“Mortgage applications increased for the second consecutive week, driven by a 5 percent jump in purchase activity,” said Bob Broeksmit, the president and CEO of the Mortgage Bankers Association, said in an email to the Washington Post.

“With the spring home-buying season in full swing, demand is still strong in most of the country, despite mortgage rates now at highs last seen in 2009.”

Freddie Mac also gave a rosy view of homebuyer resilience for this year, as less recent competition due to higher pricing and mortgage rates, has boosted the supply of housing.

“Homebuyers continue to show resilience even though rising mortgage rates are causing monthly payments to increase by about one-third as compared to a year ago,” said Freddie Mac on its website.

“Several factors are contributing to this dynamic, including the large wave of first-time homebuyers looking to realize the dream of homeownership,” said Freddie Mac.

“In the months ahead, we expect monetary policy and inflation to discourage many consumers, weakening purchase demand and decelerating home price growth,” said the Federally subsidized mortgage loan company.

Some forecasts are not as positive, with other economists predicting that home sales this year will decline as much as 10 percent from 2021 levels.

The Mortgage Bankers Association released its Mortgage Credit Availability Index (MCAI) this week, which showed credit availability declining in April with a fall of 3.2 percent to 121.1, reflecting the tightening of lending standards.

“Mortgage credit availability fell for the second month in a row, as lenders reacted to the jump in mortgage rates over the past two months,” said Joel Kan, MBA’s Associate Vice President of Economic and Industry Forecasting.

Listings continue to be well below 2021’s low levels, with contemporary prices up 17 percent year over year, according to Redfin, a real estate brokerage.

The brokerage said that while 15 percent of home sellers dropped their asking prices for four weeks to the end of April, a record high 56 percent of homes sold for above listing prices in that period.

The Associated Press has contributed to this report.