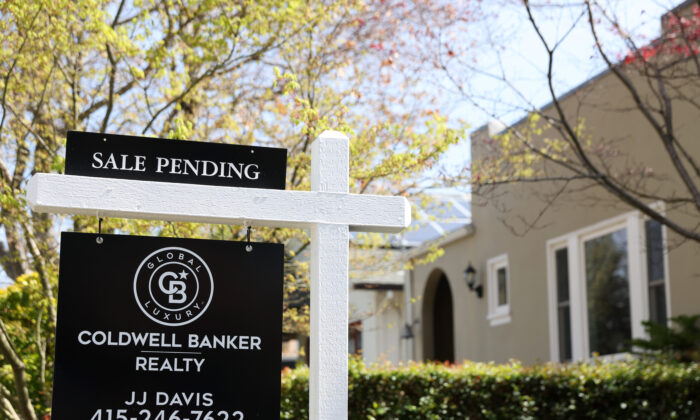 A sale pending sign is posted in front of a home for sale in San Anselmo, Calif., on March 18, 2022. (Justin Sullivan/Getty Images)
US Real Estate

Mortgage rates across the United States have been steadily increasing over the past several weeks and are now approaching record high levels.

Fixed-rate 30-year mortgage loan rates rose for the sixth consecutive week, rising by 28 basis points from 4.72 to 5 percent for the week ending April 14, Freddie Mac reported. This is the first time in more than a decade that mortgage rates have averaged 5 percent.

According to the Mortgage Bankers Association (MBA), the average interest rate for 30-year fixed-rate mortgages with conforming loan balances of $647,200 or less rose from 4.9 to 5.13 percent for the week ending April 8. Interest rates for loan balances higher than $647,200 jumped from 4.51 to 4.68 percent.

Rates for 30-year fixed-rate mortgages backed by the Federal Housing Administration increased from 4.9 to 4.95 percent.

“Mortgage rates have spiked more than 1.5 percentage points thus far in 2022. This rapid increase in rates, caused by a much more rapid pace of rate hikes and balance sheet reduction from the Federal Reserve, is in response to the booming job market and inflation being at a 40-year high,” Mike Fratantoni, MBA’s senior vice president and chief economist, said in an April 13 news release.

“The jump in mortgage rates will slow the housing market and further reduce refinance demand the rest of this year,” he said.

Mortgage applications fell 1.3 percent compared to the previous week on a seasonally adjusted basis. This is the 12th straight week that applications have fallen.

As mortgage rates are climbing, homebuyer activity is faltering, according to an April 14 blog post by real estate brokerage firm Redfin. New listings fell by 7 percent compared to a year earlier.

Though homes in March 2022 were sold at a faster pace—and for more above the list price—than any other March on record, the overall number of home sales fell 4 percent. The median home-sale price rose by 6.2 percent for the month.

“There really is a limit to homebuyer demand, even though the market over the past few years has made it seem endless,” said Redfin chief economist Daryl Fairweather.

“The sharp increase in mortgage rates is pushing more homebuyers out of the market, but it also appears to be discouraging some homeowners from selling,” he said. “With demand and supply both slipping, the market isn’t likely to flip from a seller’s market to a buyer’s market anytime soon.”