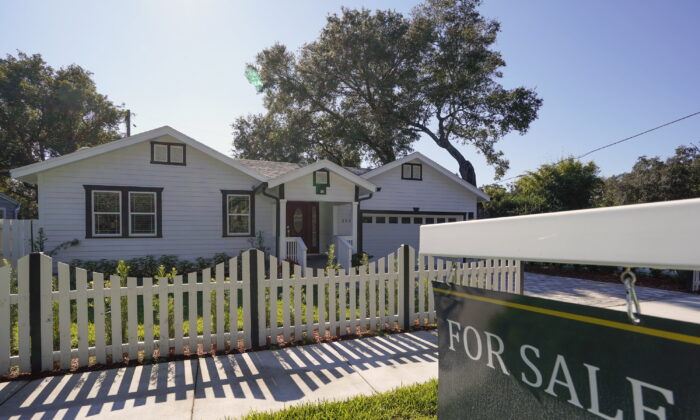 A home for sale is seen on Dec. 8, 2020, in Orlando, Fla. Sales of previously occupied U.S. homes slowed for the fourth consecutive month in May as climbing mortgage rates and prices discouraged many would-be buyers. The National Association of Realtors said Tuesday, June 21, 2022, that existing home sales fell 3.4 percent last month from April to a seasonally adjusted annual rate of 5.41 million. (AP Photo/John Raoux, File)
US Real Estate

Total mortgage application volume fell 2.3 percent from the previous week, with demand standing at its lowest level in 22 years, after a similar low last month, according to the Mortgage Bankers Association’s seasonally adjusted index for the week ended Aug. 12.

The Decline in Mortgage Application Volume

The decline in mortgage application volume comes after a surge in refinancing activity earlier this year. The sharp drop shows that the housing market is still struggling to recover, even though purchase applications fell only slightly, indicating that some buyers may be losing interest or finding it harder to get loans.

Average mortgage rates fell slightly by 5 percent from the previous week, 82 percent lower than the same week one year ago, driven by a 6 percent drop in conventional refinance applications—but it is not enough to encourage a rebound in consumer demand for home loans.

Meanwhile, the number of home purchase applications dropped by 1 percent for the week and was 18 percent lower than the same week a year ago.

The total number of home purchase applications has been trending downward since the first week in October and is now 19 percent lower than the same time last year. The decline in mortgage applications comes after a strong summer for housing, which saw record-low mortgage rates and rising home prices. Home sales had their strongest year since 2006 at the end of 2016, but overall demand is starting to slow down as interest rates rise again.

“Home-purchase applications continued to be held down by rapidly drying up demand, as high mortgage rates, challenging affordability, and a gloomier outlook of the economy kept buyers on the sidelines.”

Potential homebuyers are dealing both with higher interest rates and near 40-year high inflation, which has deterred many home-purchase agreements, along with a concern that housing values will start to fall.

Although mortgage rates have come down slightly from their recent highs, only a few borrowers are currently benefiting from refinancing.  The most recent data from the National Association of Realtors (NAR) showed that potential homebuyers are waiting for rates to drop even further before taking action; in fact, existing sales fell 1.8 percent in June compared to May. Additionally, homebuilders have been laying off workers as demand has slowed down across the country.

“However, if home price growth slows more significantly and mortgage rates move lower, we might see some purchasing activity return later in the year,” said Kan.

The Federal Reserve has raised interest rates substantially since it started raising its policy rate in March in order to fight high inflation, but it has taken a toll on the real estate market.

The average contract interest rate for 30-year fixed-rate mortgages with conforming loan balances decreased to 5.45 percent last week from 5.47 percent a week earlier, with points decreasing to 0.57 from 0.80 for loans with a 20 percent down payment.

The 30-year rate is down more than 50 basis points from its June 2020 high of 5.98 percent, providing some relief for buyers in the market, but it is higher from a year ago when it was just over 3 percent.

Home mortgage rates have been rather stable this week, but new economic data, expected on Aug. 17, may change the situation, with investors highly anticipating the monthly retail sales report.

The Fed is also expected to release the minutes from its last meeting on July 26-27 this afternoon, which may offer a glimpse into its future decisions on the interest policy rate.

Mortgage rates are at their lowest in more than two years, which is great news for home buyers. While the Federal Reserve remains on track to raise interest rates this year, it’s unlikely that mortgage rates will rise significantly higher.