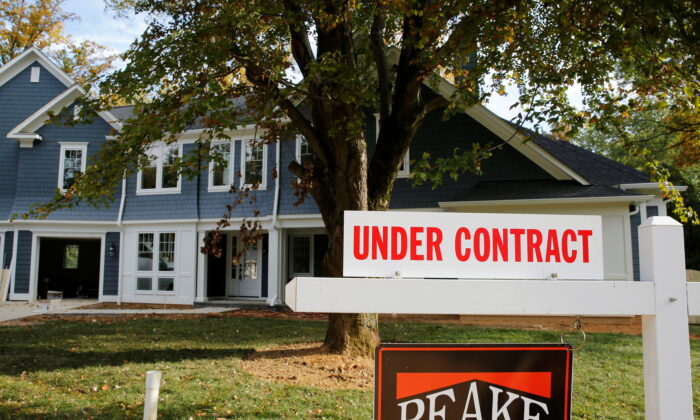 A real estate sign advertising a home "Under Contract" is pictured in Vienna, Virginia, outside Washington on Oct. 20, 2014. (Larry Downing/Reuters)
US Real Estate

Mortgage applications in the United States decreased 6.3 percent for the week ending July 15 compared to the previous week, according to data from the Mortgage Bankers Association’s (MBA) Weekly Mortgage Applications Survey.

Mortgage demand fell for a third week in a row to the lowest point since 2000 as high inflation and interest rates hammered American consumers, putting a damper on the housing market, Joel Kan, MBA’s associate vice president of economic and industry forecasting, said in a news release.

“Similarly, with most mortgage rates more than two percentage points higher than a year ago, demand for refinances continues to plummet, with MBA’s refinance index also falling to a 22-year low,” Kan said. “Purchase activity declined for both conventional and government loans, as the weakening economic outlook, high inflation, and persistent affordability challenges are impacting buyer demand.”

Homebuyers have lost considerable purchasing power, as mortgage rates have almost doubled since the start of the year, forcing up prices across the board.

Homebuilder activity has taken a major slump as buyer demand has declined, a leading sign of an economic downturn.

“Housing Starts hit a 14-month low in June, down 6% year-over-year. Tends to be a leading indicator for the economy, recession odds continue to rise,” Charlie Bilello, founder and CEO of Compound Capital Advisors, wrote on Twitter.

The Refinance Index decreased 4 percent from the previous week and was 80 percent lower than the same week in 2021.

Refinance applications are at a 22-year low, but a drop in buyer demand caused the refinance share of mortgage activity to increase to 31.4 percent from 30.8 percent of total applications from the previous week.

Although buyers have been less affected by weekly changes in interest rates, the gradual rise in rates since March has taken its toll on the housing markets, as mortgage rates rose again in the week of July 11 following a three-week decline.

The average contract interest rate for 30-year fixed-rate mortgages with conforming loan balances increased to 5.82 percent from 5.74 percent, which is 3.11 percent higher than the same week in 2021.

Points, or fees paid to a mortgage lender, have increased to 0.65 from 0.59, including the origination fee for loans, with a 20 percent down payment.

Other central banks like the European Central Bank are making similar moves against inflation.

Analysts say that the sudden shift in mortgage rates in 2022 has already led to a recession in the housing market, but a further rise in interest rates may cause a general recession in the economy.

“I think that the most likely scenario remains that the economy’s going to navigate through without going into a recession, ” said Moody’s Analytics Chief Economist Mark Zandi in an interview with Bloomberg.

Although he is an optimist, Zandi said, the parts of the economy that are in a recession already, such as housing, are “taking it on the chin.”

Zandi described American consumers as “the firewall between an economy that continues to grow and a recession. And there’s a fire and the firewall is under pressure, but I think it will hold and I think we’ll make our way through.”