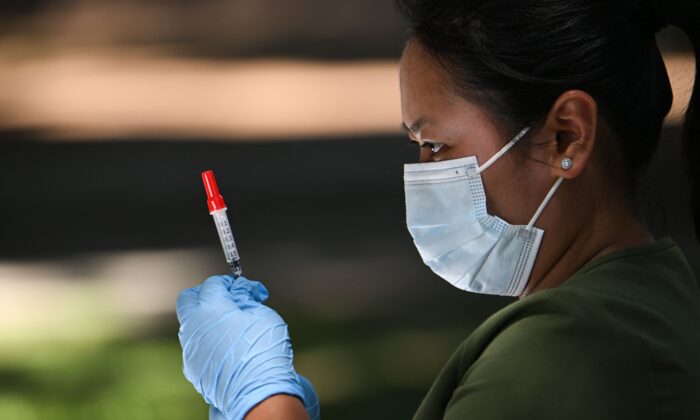 A health care worker prepares a dose of the JYNNEOS monkeypox vaccine at a pop-up vaccination clinic in Los Angeles, Calif., on Aug. 9, 2022. (Patrick T. FALLON/AFP via Getty Images)
Companies

Monkeypox vaccine maker Bavarian Nordic has warned it may not be able to meet demand as cases of the virus continue to surge across the globe.

“It’s a very dynamic market situation,” Rolf Sass Sorensen, a vice president at the firm, told Bloomberg on Wednesday. “Demand keeps rising, and it’s no longer certain that we can continue to meet the demand we’re facing even with the upgrade of our existing manufacturing site in Denmark.”

The Denmark-headquartered company is the only such company with an FDA-approved vaccine for monkeypox in people aged 18 and over who are at high risk of infection. It is approved under the name JYNNEOS in the United States.

Amid increasing demand for the vaccine, the company is now looking into outsourcing some of its production, including technology transfer to a third-party producer in the United States, which would enable bulk production of the vaccine as opposed to just having the vaccine vials filled and packaged.

“We’re looking at ways to get help from partners in all the various production steps of the vaccine,” Sorensen said. “We are also investigating a tech transfer to a contract manufacturer in the United States to increase capacity. We don’t have any concrete negotiations in the works with bulk producers, but we’re investigating and looking at what options there are.”

The company previously said it would not consider a technology transfer to a third-party producer because it would be too expensive and too long, and would instead deliver on all orders from its Danish facility, Bloomberg reports.

Cases Increasing Across the Globe

Monkeypox is a rare virus believed to be transmitted to humans from animals and is endemic to Central and West Africa, where cases typically are found in places that are in close proximity to tropical rainforests.

However, in recent months the virus has spread across the globe, with a total of 38,019 confirmed cases worldwide, according to Center for Disease Control (CDC) data, of which 37,632 are in locations that have not historically reported monkeypox.

Overall, there have been 12,688 confirmed cases in the United States, according to the CDC, while another 5,719 are in Spain and 3,186 are in Germany.

According to scientists, the virus spreads from one person to another through close contact with bodily fluids, lesions, respiratory droplets, and contaminated materials.

It can cause a number of symptoms, such as fever, body aches, swelling of the lymph nodes, and a bumpy rash that typically surfaces one to three days after the fever begins, before spreading to other parts of the body. The rash can last up to a month.

Monkeypox has a fatality rate of between 1 and 11 percent in those who become infected, although previous vaccination against smallpox, which is related to the monkeypox virus, may provide protection.

The majority of cases have been found among homosexual, bisexual, or other men who have sex with men, according to health officials; however, the officials have repeatedly noted that the virus itself is not a sexually transmitted infection and can be caught by anyone.

On Tuesday, for example, a child in Florida under the age of 4 was identified as the first pediatric case of monkeypox in the state, according to the Florida Department of Health.

At least eight children in the United States have now tested positive for monkeypox, according to ABC News.