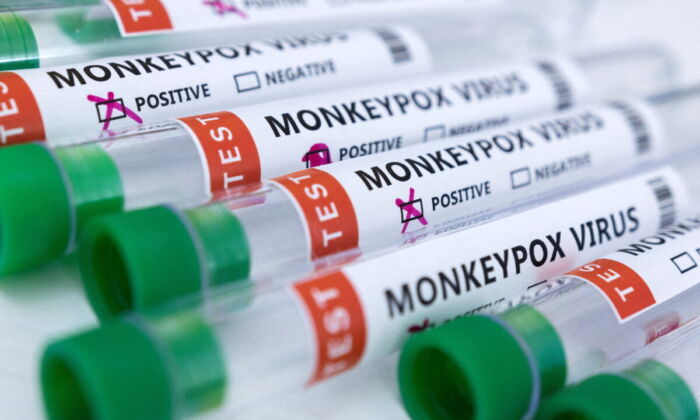 Test tubes labeled "Monkeypox virus, positive and negative" in a photo illustration taken on May 23, 2022. (Dado Ruvic/Reuters)
US

PUNTA GORDA, Fla.–A Florida child under the age of 4 has been identified as the first pediatric case of monkeypox in the state, according to The Florida Department of Health.

The child tested positive in Martin County on Florida’s Treasure Coast, which has a total of six reported cases, according to the health department’s Reportable Disease Frequency Report. Statewide, there are six teenagers in the 15-to 19-year-old age bracket who have the disease; two in Broward County, one in Lee, one in Leon and two in Miami-Dade.

The child was classified as “being in the 0-4 category,” Florida Department of Health (DOH) spokesperson, Jeremy Redfern confirmed to The Epoch Times on Aug. 16. He added that privacy issues prevented him from releasing any further information on the child’s case.

Monkeypox “transmits with close skin-to-skin contact,” he said. “So a parent with monkeypox can give their child monkeypox if they’re in close contact.”

Redfern said the current FDA-approved treatment is a drug called Tpoxx, which is also approved for smallpox.

The FDA recently “expanded vaccine eligibility to some children, if they’re at high-risk and they’ve been exposed to monkeypox,” he explained.

Those who are at high risk are advised to speak with their doctors, Redfern said.

“If their doctor does have the monkeypox vaccine, they should contact their county health department.”

The DOH indicates it has recorded 1,317 cases of monkeypox statewide. The most affected counties are Broward with 446 cases and Miami-Dade with 513 reported cases.

In 28 of Florida’s 67 counties, there are reportedly 1,266 confirmed or probable monkeypox cases.  Last week the state reported 938 cases.

Florida provides up-to-date information on monkeypox at FloridaHealth.gov, while case data for reportable diseases including monkeypox can be found on FLHealthCharts.gov.

Monkeypox is described as a rash that develops into “hard, round, fluid” (pus-filled skin lesions) and is transmitted by “close human-to-human contact with the lesions or with contaminated clothing.”  The disease is rarely said to be fatal.

U.S. data shows as of Aug. 1 there were 5,811 confirmed cases of monkeypox reported in 48 states; so far, most of the cases reported have occurred among gay men.

The World Health Organization has issued a global health emergency while Florida Gov. Ron DeSantis said he would not be issuing an emergency declaration.

The governor made an announcement at an Aug. 3 press conference that he does not “believe issuing a public health emergency is necessary, nor does he think Floridians should fear the disease.”

“Any of the politicians trying to scare you about this … do not listen to their nonsense,” he said. “We are not doing fear. We are going to do facts.”

Florida’s Surgeon General, Dr. Joseph Ladapo, said the state has approximately 24,000 doses of the vaccine from the national stockpile and has distributed about 8,500 doses.