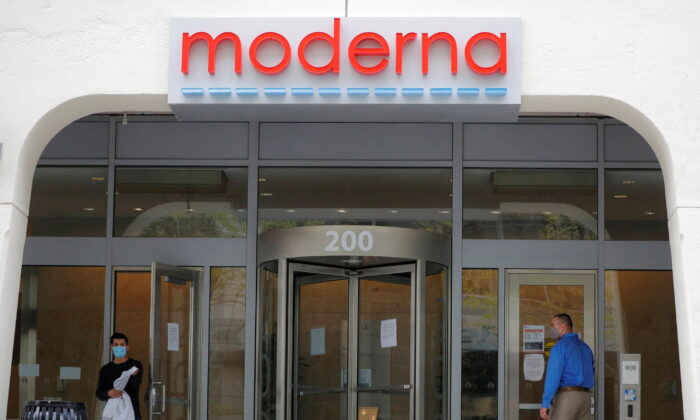 FILE PHOTO: A sign marks the headquarters of Moderna Therapeutics, which is developing a vaccine against the coronavirus disease (COVID-19), in Cambridge, Massachusetts, U.S., May 18, 2020. REUTERS/Brian Snyder
Companies

Moderna Inc. said on Monday that it testing potential vaccines against monkeypox in pre-clinical trials as the disease spreads in the United States and Europe.

The announcement comes as the World Health Organization (WHO) said on Tuesday that there have been 131 cases of monkeypox identified around the world, with most of them occurring in Spain, Portugal, and the United Kingdom.

Several cases or possible cases have been reported in the United States, including in Massachusetts, New York City, Utah, and Florida.

In a statement on Twitter on Monday, pharmaceutical and biotechnology giant Moderna pointed to its commitment to advancing programs by 2025 against pathogens that pose a threat to public health, which it announced in March this year.

“Underscoring this commitment, and as monkeypox is of global public health importance as identified by the WHO, we are investigating potential monkeypox vaccines at a preclinical level,” Moderna said.

Moderna did not provide further details regarding its trials on monkeypox vaccines.

The vaccine manufacturer’s announcement comes one day after the Centers for Disease Control and Prevention (CDC) said that doses of the Jynneos vaccine are being released in the United States to prevent monkeypox from spreading.

Made by Denmark-based biotech group Bavarian Nordic, the Jynneos vaccine is approved in the United States to be used against smallpox and monkeypox in people aged 18 and over who are at high risk of infection.

According to the CDC’s website, the monkeypox virus is related to smallpox, meaning that the latter vaccine may be able to protect individuals against monkeypox.

Jennifer McQuiston, deputy director of the Division of High Consequence Pathogens and Pathology at the CDC, told reporters at a media briefing on Monday that there are over 1,000 doses of the Jynneos vaccine that were approved in the United States in 2019 and that are in the strategic national stockpile. They were initially set aside to be used for a potential smallpox outbreak.

“Right now we are hoping to maximize vaccine distribution to those that we know would benefit from it,” McQuiston said. “So those are people who’ve had contact with known monkeypox patients, health care workers, very close personal contacts, and those in particular who might be at high risk for severe disease.”

“I can report that there has been a request for release of the Jynneos vaccine from the national stockpile for some of the high-risk contacts of some of the early patients. So that is actively happening right now,” she added.

Monkeypox is a virus transmitted to humans from animals and is similar to smallpox, although it is clinically less severe than smallpox.

It is endemic to several African countries, typically those in close proximity to tropical rainforests, and spreads from one person to another through close contact with bodily fluids, lesions, respiratory droplets, and contaminated materials.

The virus can cause symptoms including fever, body aches, swelling of the lymph nodes, fatigue, and a prominent bumpy rash that often begins on the face before spreading to other parts of the body and can last up to a month

A number of individuals who have been diagnosed in the current outbreak have been homosexual men, WHO officials have said, although the virus itself is not a sexually transmitted infection and can be caught by anyone.