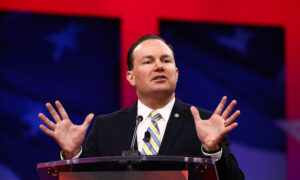 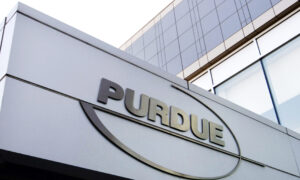 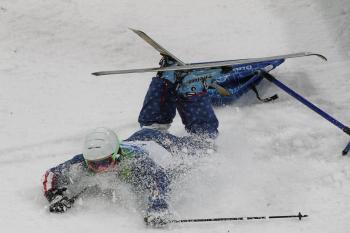 Patrick Deneen after his spectacular crash on the final jump of the men's mogul on Sunday. (Evan Ning/The Epoch Times)
US

By Matthew Little
Print
CYPRESS MOUNTAIN, Canada—Racing through bumps the size of a car roof to leap off "air bumps" that send them soaring through the air to do back flip helicopters, it's a wonder more people don't get hurt in the moguls competition.

But though there were no serious injuries at the men's medal final on Sunday, tragedy did strike two thirds of the U.S. men's team in the biggest race of their life, leaving Patrick Deneen and Nathan Roberts at the bottom of the board, their runs unscored after both went awry on their way down the hill.

But there was redemption as well when Bryon Wilson scored silver.

Speaking about their experience as they left the course, the team shared the loss and the gain.
“I knew I was in a really bad spot and wasn't going to ski out of it,” said Patrick Deneen whose spectacular crash saw him attempt a massive backflip but miss the landing and tumble through one of the gates.

“I am happy I was able to get here, but I didn't come to fall, I came here to win and it happens every once in a while but yeah, I'm a little bit bummed right now.”

Deneen said he has been doing this sport for quite a while but had been a bit inconsistent lately and that showed during his run. But despite the loss, he was already looking forward, picking up the pieces as one dream ended and another could begin.

“This isn't my entire life right here. I really enjoy skiing and I really want to ski well in the World Cup. I had a bad day here, but it happens every once in a while.”

He said he was looking forward to redemption in Japan where he won the World Cup last year, and that although he didn't reach his goal on this day, he had found it before, giving him some consolation.

“Last year I won the World Championships, I was champion of the world, that is when I realized my dream.”

“I am pretty glad this experience is over. I am a little bit bummed I wasn't able to stick that bottom jump.”

Nathan Roberts also ran into trouble when he nearly lost control coming down the moguls between the first and second air bump and had to collect himself just a few feet from the padded side barricade.

“I was skiing fast, pushing it and just got snagged up on some snow and you can't make a mistake at that speed.”

“I was just trying to save myself, you know, bailing from the centre line to the outside. Those bumps are big.”

He said he finished the run with one of the biggest backflips of his life.

“This is my dream, to have an opportunity to represent my country and you know compete at the biggest stage of our sport and for the world. I am still learning, this is just an amazing ride so far and it's only been a weekend.”

“I would have loved to perform better and represent my country a bit more than that, but I am going to take it in and cheer on the rest of the U.S. athletes throughout the games.”

In the end, it was Bryon Wilson who took a medal for the U.S., scoring bronze after Canadian Alexandre Bilodeau displaced his top-marked score.

“I am super stoked,” said Wilson.

“Unfortunately, it wasn't their day,” he said of his teammates.

Dale Begg-Smith, formerly of Canada, now an Australian, took silver for the Aussies.