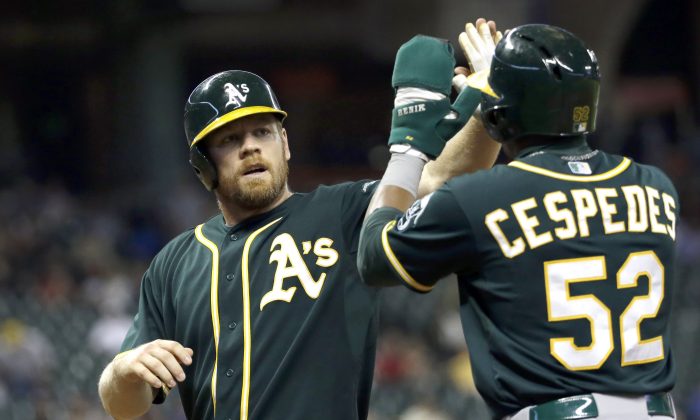 This week, the final run towards postseason baseball begins. The Midsummer Classic has passed and the home team for the World Series has been decided. Many of these teams will likely see the postseason in one way or another. Another important date coming up is the non-waiver trade deadline. A number of these teams have made some acquisitions prior to the deadline but a number of trades will be expected as teams want to patch up any holes they may have while the goal of World Series champion is in sight.

Their losses are close and their wins are substantial; the Oakland Athletics continue to stand at least a head above the rest. The A’s won five of eight in the first week after the break. Josh Donaldson and Brandon Moss are the one-two punch in their potent offense. Sonny Gray notched two more wins to increase his win total to 12. While Jeff Samardzija has taken to his new team well, Jason Hammel is struggling on his return to the American League. The Los Angeles Angels are in striking distance of the division so the A’s will have to keep their foot on the gas pedal to the end of the season.

The big three of the Angels, Mike Trout, Albert Pujols and Josh Hamilton, are producing and working well together to be a formidable threat every game now. The Angels won five out of nine and three of those wins came against the Seattle Mariners, keeping them away for the time being. The one biggest flaw in the Angels continues to be their bullpen. After acquiring Jason Grilli and Joe Thatcher to bring effective relievers; the Angels also acquired Huston Street, another established reliever with closer experience After the first week of the final 60 plus games of the season; the Angels are just two games back of the American League-leading A’s and have a sizable eight-game lead as the first Wild Card team. They will not settle for the Wild Card and the division is still in striking distance.

Winning just four out of eight games since the break, the Los Angeles Dodgers are making their race in the National League West a very close one. With just a half game ahead of the San Francisco Giants, the Dodgers will be counting on Clayton Kershaw to be the ace and best pitcher in the game and continue to lead the Dodgers to postseason baseball that could potentially end in the World Series. It also helps that the spark plug, Yasiel Puig has been hitting triples in bunches and being one of the biggest contributors in the National League..

The Washington Nationals are in a constant back-and-forth affair with the Atlanta Braves over who is the best in the National League East. The Nationals got off to a good start in the second half, winning five out of eight games coming off the break. Tanner Roark has been a great surprise in the Nationals’ rotation, becoming a 10-game winner with two wins after the break. A major problem continues to be health in regards to Ryan Zimmerman, who finds himself on the disabled list again. The Nationals will need to count on Rendon to continue his breakout season. With just a one and a half game lead over the Braves, the Nationals will be in the thick of a postseason race and only one can win the East.

The Detroit Tigers continue to struggle despite having a strong pitching rotation. The Tigers only won four out of nine games, including three losses to the Cleveland Indians The Tigers would bounce back to win four of the next five against the Arizona Diamondbacks. Despite the struggles, especially against a division opponent, the Tigers remain five games ahead of the Kansas City Royals. Unless the Royals find a consistent offense, it will be hard to imagine the Tigers losing the division.

Despite the strong drop from dominant National League West leader, to struggling offensively, the San Francisco Giants are still well in the race. Despite winning five of their first seven games following the break, the Los Angeles Dodgers would come into town and it would be a problem for the Giants. The Dodgers would take the first two games of the three-game series decisively, allowing one run by the Giants. The two losses would be crucial in their race for the West as they are a half game behind the Los Angeles Dodgers. The Giants do have the first of two Wild Card spots but after having an early hold on the West, the division is still in sights and not many teams would want their season to come down to one game after having the best record in the league.

The Milwaukee Brewers would create some space in the National League Central by winning five out of eight coming off the break. More importantly, the Brew crew swept the Cincinnati Reds on three close games at home. The Brewers started slow against the Washington Nationals but the Brewers deep lineup is supporting strong pitching that allowed two runs or less in five games after the break. Jonathan Lucroy, Khris Davis and Ryan Braun are supplying the offense to help starters Kyle Lohse and Matt Garza. With a three game on the St. Louis Cardinals, there is a chance that the Brewers can see postseason baseball as Central division champions.

The Baltimore Orioles are getting contributions from Manny Machado and others up and down the lineup but Adam Jones has emerged as one of the better talents in the league now. The Orioles won five out of nine, keeping themselves three games ahead of the New York Yankees. On a West coast trip that saw them facing the three best teams in the American League West, I would consider it a successful road trip to come back with a split at worst. The Orioles may still be missing starting pitching but they haven’t had a problem holding onto the division lead.

The hot streak the St. Louis Cardinals carried into the break would not carry over. After winning the first two after the break, the Cardinals would drop four of the next five, pushing them back of the Milwaukee Brewers yet again. Adam Wainwright would have a rare bad game and the Tampa Bay Rays would succeed in their trip to St. Louis with a two-game sweep. The Cardinals are suffering from injuries so some acquisitions at the deadline could play a pivotal role if they intend to make up the three games they are back from the Milwaukee Brewers.

The Atlanta Braves are doing their best to stay in the race but a series win against the Philadelphia Phillies, sitting at the bottom of their division, is quickly erased after a four-game series loss to the Miami Marlins who are not right in the race but division wins could make the Braves sweat. The Braves are going to need more consistent offense to support their strong pitching if they want to catch up to the Washington Nationals. The Braves are just a game and a half behind the Nationals but they have the second Wild Card spot if they can keep the hot St. Louis Cardinals away.