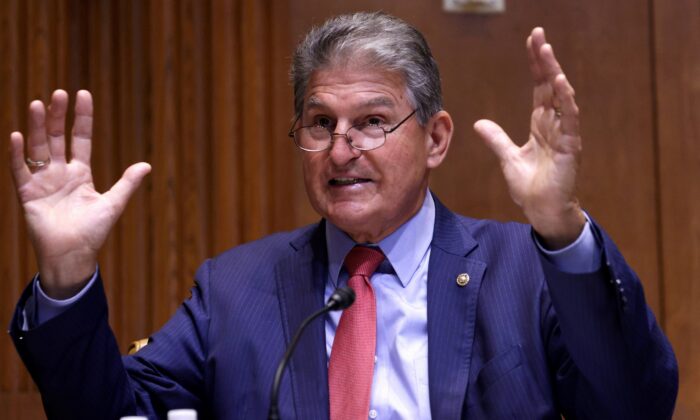 Sen. Joe Manchin (D-W. Va.) speaks during a hearing before Transportation, Housing and Urban Development, and Related Agencies Subcommittee of the Senate Appropriations Committee at the Dirksen Senate Office Building, on Capitol Hill in Washington on June 10, 2021. (Alex Wong/Pool via Reuters)
Democrats

Inflation ‘Not Transitory’ and ‘Getting Worse’: Sen. Manchin

Sen. Joe Manchin (D-W. Va.), a moderate who has broken with his party over a slew of issues, took to Twitter on Wednesday to warn that unprecedented inflation is not “transitory” as his party insists, but is only “getting worse.”

Currently, inflation of the U.S. dollar is at its highest level since 1990. According to the Labor Department’s Consumer Price Index (CPI), inflation jumped by 0.9 percent in October alone, more than doubling September’s 0.4 percent increase.

The energy sector has been hit the hardest by rising costs according to different Labor Department data.

These increased prices have been partly driven by an intentional effort by the Organization of Petroleum Exporting Countries to decrease their oil production. At the same time, the United States has cut its own oil production significantly since President Joe Biden, who promised to “transition away” from fossil fuels during the 2020 presidential campaign.

Since Biden took office, many Democratic leaders, including Speaker of the House Nancy Pelosi (D-Calif.), Senate Majority Leader Chuck Schumer (D-N.Y.), and Democratic caucus chair and co-chairs Hakeem Jeffries (D-N.Y.) and Pete Aguilar (D-Calif.), have insisted that this unprecedented inflation is the result of the nation’s efforts to bounce back from the COVID-19 pandemic.

The inflation, these leaders have insisted, is “transitory.” Sen. Joe Manchin, who has raised the alarm on inflation for months, does not agree with this assessment.

On Twitter, Manchin wrote: “By all accounts, the threat posed by record inflation to the American people is not ‘transitory’ and is instead getting worse. From the grocery store to the gas pump, Americans know the inflation tax is real and DC can no longer ignore the economic pain Americans feel every day.”

The “inflation tax,” long a talking point for conservative and libertarian elements of the Republican Party, has been embraced by Manchin, who has demanded that his party limit its spending in order to combat continued inflation of the money supply.

The United States has added trillions in new spending since the arrival of the CCP (Chinese Communist Party) virus to its shores.

In March 2020, soon after the beginning of the global pandemic, Congress authorized $2.2 trillion in spending to respond to the virus, which included direct payments to qualifying American families. President Donald Trump signed that bill into law not long after.

Later the same year, after months of wrangling, Congress passed an additional $900 billion in spending to modify and extend the earlier legislation, which Trump also signed into law.

Around a year after its original CCP virus relief package Congress, now controlled by Democrats, used the reconciliation process to pass a further $1.9 trillion bill called the American Rescue Plan on a party-line vote. The bill was quickly signed into law by Biden.

Recently, Democrats also passed a $1.2 trillion infrastructure bill with some Republican support, though many in the GOP opposed the bill.

At the same time, Democrats tried to push through a $1.75 trillion budget bill even though the legislation had not been scored by the Congressional Budget Office (CBO); They failed in this effort after moderates demanded a CBO score as a precondition to vote for the bill, but Democrats still hope to pass the legislation in the near future.

The U.S. government has already added $6.2 trillion in new obligations with these bills, which will shoot to $7.95 trillion if the Democrats’ budget reconciliation bill is passed.

“I will not support a bill that is this consequential without thoroughly understanding the impact it will have on our national debt, our economy, and most importantly all of our American people,” said Manchin at a Nov. 1 press conference. “We must allow time for complete transparency and analysis on the impact of changes to our tax code, energy, and climate policies to ensure that our country is well-positioned to remain the superpower of the world.”

At the same conference, Manchin accused his party of hiding the price of the bill.

The “so-called $1.75 trillion” reconciliation bill, said Manchin, is full of “shell games” and “budget gimmicks that make the real cost of the [bill] estimated to be nearly twice that amount.” He continued, “This is a recipe for economic crisis. None of us should ever misrepresent to the American people what the real cost of legislation is.”

“To be clear, I will not support the reconciliation bill without knowing how the bill will impact our debt and our economy and our country,” the West Virginia Democrat vowed.

Manchin also repeated a demand first put forward in a Sept. 2 op-ed for the Wall Street Journal. To win his vote, he said on both occasions, his party must give him “greater clarity about why Congress chooses to ignore the serious effects inflation and debt have on existing government programs.”

While Manchin staking out a position against his party is nothing new, he is now one of the only Democrats who have broken from the party line over inflation.

Manchin has tied his support for the Democrats’ budget bill, in part, to the effects of inflation. His latest split with the party over inflation could bode poorly for Democrats as they attempt to win Manchin’s vote for the budget bill after months of delays.

After the Labor Department report came out, Biden said that fighting inflation would now be a “top priority” for the administration, but getting inflation under control is sure to take some time—time that will be in short supply for congressional Democrats as they frantically try to pass their budget before the 2022 midterm election season.