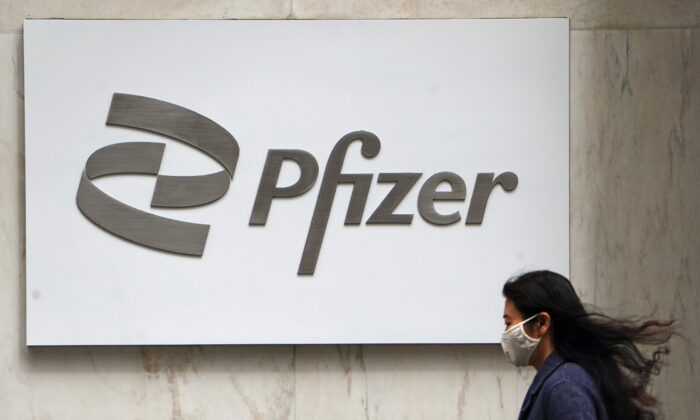 A person walks past a Pfizer logo amid the coronavirus disease (COVID-19) pandemic in the Manhattan borough of New York on April 1, 2021. (Carlo Allegri/Reuters)
AMERICA

The first patient in a clinical trial analyzing Pfizer’s oral COVID-19 drug has received the first dose of the medication, the company announced on Sept. 1.

The study is analyzing a protease inhibitor known as PF-07321332. The drug is meant to combat COVID-19 in patients who experience symptoms from the disease, but don’t require hospital care.

The randomized, double-blind trial will enroll about 1,140 participants, approximately half of whom will receive a placebo. The participants will receive the drug or the placebo every 12 hours orally for five days.

People who are given the drug will also receive ritonavir.

“If successful, we believe this therapy could help reduce severity of illness among a broad population of patients,” Rod MacKenzie, Pfizer’s chief development officer, said in a statement.

The company has already begun a separate trial that’s testing a different protease inhibitor, this one administered via IV.

Inhibitors are a type of medication that stops viruses from replicating.

Antiviral pills against COVID-19 have yet to be developed. The IV-administered remdesivir, produced by Gilead Sciences, was approved by U.S. drug regulators in 2020.

Other companies are also attempting to produce the medicines, including Merck and Roche.

Pfizer said that if its trial shows PF-07321332 is safe and effective, it could ask regulators for authorization in the fourth quarter of 2021.