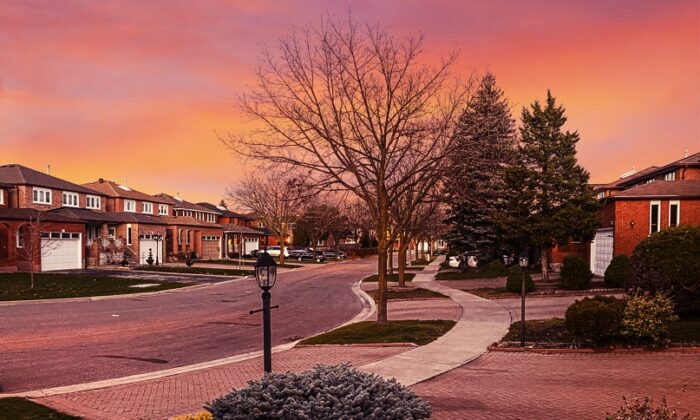 A suburban neighborhood at sunset, on Nov. 10, 2020. (GordonEIPH via Wikimedia Commons/CC BY-SA 4.0)
US Real Estate

Surging mortgage rates are now threatening to drive U.S. home prices down as much as 20 percent, according to a new study.

Many prospective buyers have been pushed out of the market due to rising home prices and higher mortgage rates.

The sharp rise in mortgage rates this year “boost the odds of a severe house price correction,” as the cost to purchase a home reaches its peak, according to research from the Federal Reserve Bank of Dallas, released on Nov. 15.

The analysis, conducted by Dallas Fed economist Enrique Martinez-Garcia, said that housing prices after adjusting for inflation have risen since the start of the pandemic to their highest level since the 1970s.

The End of the Pandemic-Era Housing Bubble

The pandemic caused a massive bubble in the American real estate market, which grew due to record-low mortgage rates and a massive surge of people look for a home to work remotely.

However, skyrocketing demand for homes had caused a massive housing shortage and led to a surge in prices.

Home prices rose a total of about 61 percent between 2013 and 2022, after adjusting for inflation, actually outpacing the previous housing bubble record from 1998 to 2007, right before the Great Recession, according to Martinez-Garcia.

The last major housing market crash was between the fourth quarter of 2006 and the second quarter of 2012, which saw “real” home prices fall 37 percent.

This time, a sharp home price correction would be less likely to cause a 2008–style meltdown “because of relatively tight mortgage underwriting in the 2010s, [so] the credit scores of mortgage borrowers today are generally higher than they were prior to that last housing correction,” said Fed Governor Christopher Waller back in October.

Since the beginning of the year, the Federal Reserve’s monetary policies have caused the mortgage rate to hit its highest level since 2002.

Martínez-García painted a rather “pessimistic” situation, as the massive rise in mortgage rates could cause housing prices to tumble by 15–20 percent, leading to a 0.5–0.7 percent decline in personal spending nationwide.

If personal consumption tumbled at that rate, he fears that it would have an effect on the ability of the attempts of Fed policymakers to avoid a recession.

The Fed has been aggressively raising interest rates to bring record-high inflation under control, and has raised rates six times this year, to a target range of 3.75–4.0 percent.

The central bank hopes that raising the cost of borrowing will lower demand from businesses and consumers and thus control inflationary growth.

“In the current environment, when housing demand is showing signs of softening, monetary policy needs to carefully thread the needle of bringing inflation down without setting off a downward house-price spiral—a significant housing sell-off that could aggravate an economic downturn,” Martínez-García wrote.

Further monetary policy tightening by the Fed could “boost the odds of a severe house price correction,” he noted.

Average 30-year fixed-rate mortgages are now above 7 percent, after beginning the year at 3.14 percent.

The proportion of mortgage debt as a share of disposable household income was expected top 6 percent by the end of the third quarter, up from 3.9 percent in the second quarter.

Higher mortgage rates should put an end to the current boom in home prices; but average price gains in the sector have yet to cool, though some previously “hot” locations such as Phoenix, Arizona, and Boise, Idaho, have seen a double-digit drop in home prices.

Meanwhile, the national median price for an existing single-family home rose 8.6 percent in the third quarter, to $398,500, according to the National Association of Realtors on Nov. 10.

This is a decline from the second quarter, which saw a home prices gain of 14.2 percent, a sign that things are beginning to slow.

Home sales are expected to slip by 7 percent next year as more people are priced out of the market, said NAR Chief Economist Lawrence Yun this month.

Yun said he expects median home prices to rise by 1 percent, but he does not anticipate a massive drop, as inventory remains tight, increasing competition between buyers still competing for desirable properties.

“Although the situation is challenging, there remains a window of opportunity to deflate the housing bubble while achieving the Fed’s preferred outcome of a soft landing. This is more likely to happen if the worst-case scenario of a price correction-induced economic downturn can be avoided.”