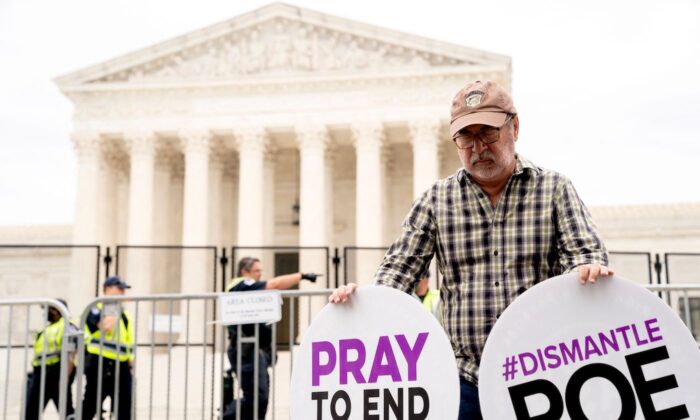 A pro-life demonstrator prays in front of the U.S. Supreme Court in Washington on June 21, 2022. (Stefani Reynolds/AFP via Getty Images)
Social Issues

More than 40 attacks against pro-life individuals and organizations have been recorded since the leak of a Supreme Court draft opinion indicating a potential overturn of Roe v. Wade, according to a report released on June 16.

The report, published by Susan B. Anthony Pro-Life America, says the over 40 incidents that have occurred in recent weeks involve violence, vandalism, and intimidation.

“Every abortion is an act of violence—violence against the unborn child who is killed and violence against the mother who is wounded in one of the deepest ways possible,” Marjorie Dannenfelser, the group’s president, said in the statement accompanying the report.

“In contrast to that inherent violence, the vast network of pregnancy centers, maternity homes, and other organizations across America exist to peacefully and lovingly serve women and families,” it said.

The latest incidents detailed in the report include vandalizations in Hope Pregnancy Center in Philadelphia, Pennsylvania, on June 11. The office of the pro-life group had four windows smashed and vandalized with graffiti.

An online blog post dated June 12 from someone who claimed credit for the damage under the name of “Anti Hope Brigade” said they were “inspired by the actions of comrades” in Wisconsin, Colorado, New York, and a growing list of places, according to the report.

Biden must unequivocally condemn these attacks

The sharp rise in attacks began in early May when a leaked draft opinion indicated that the Supreme Court is poised to strike down Roe v. Wade, the 1973 ruling concluding access to abortion is a constitutional right.

The institution noted Jane’s Revenge, which has taken credit for dozens of recent attacks on pregnancy centers across the nation, issued a new threat on June 15. The pro-abortion radicals, in the statement published on its website, declared “open season” on pro-life institutions that do not shut down.

“President Biden, his administration, and every elected officeholder and candidate needs to unequivocally condemn them now, including illegal picketing of Supreme Court justices’ homes and the attempted murder of Justice Kavanaugh,” read the statement.

The group appeared to be referring to the California man who was arrested with a gun near the Maryland home of a Supreme Court justice on June 8. The man named Nicholas John Roske was indicated on a charge of attempted assassination.

Meanwhile, 16 U.S. senators, led by Sen. Jerry Moran (R-Kan.), also expressed concerns and urged information about how the Department of Justice (DOJ) is addressing the recent violence and threats against the groups in a letter to Attorney General Garland dated June 7.

The DOJ and Department of Homeland Security have not commented on the attacks.

The FBI has previously told The Epoch Times that it’s “investigating the recent attacks and threats targeting pregnancy resource centers and faith-based organizations across the country.”

“The FBI takes all threats seriously and we continue to work closely with our law enforcement partners and will remain vigilant to protect our communities,” it added.