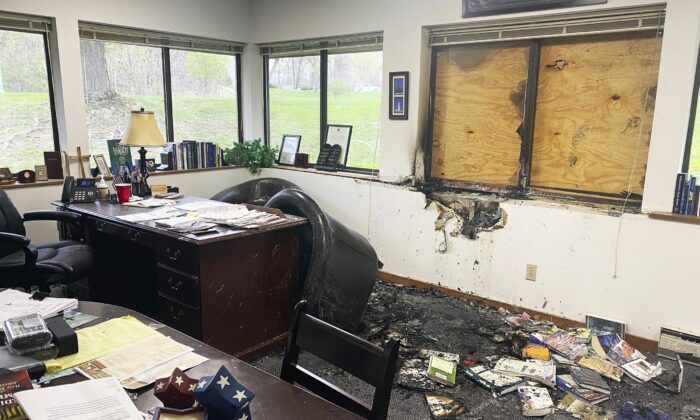 A fire damaged the Wisconsin Family Action headquarters in Madison, Wis., on May 8, 2022. (Alex Shur/Wisconsin State Journal via AP)
Judiciary

Pro-abortion radicals that have taken credit for some of the approximately two dozen attacks against pregnancy centers and other pro-life institutions in recent weeks have issued a fresh threat as the Supreme Court weighs whether to strike down Roe v. Wade.

Jane’s Revenge’s threat, published by a revolutionary website, says that any centers and clinics that do not shut down will be targeted in the future.

“From here forward, any anti-choice group who closes their doors, and stops operating will no longer be a target. But until you do, it’s open season, and we know where your operations are,” the compilation of radicals said.

“The infrastructure of the enslavers will not survive. We will never stop, back down, slow down, or retreat. We did not want this; but it is upon us, and so we must deal with it proportionally. We exist in confluence and solidarity with all others in the struggle for complete liberation. Our recourse now is to defend ourselves and to build robust, caring communities of mutual aid, so that we may heal ourselves without the need of the medical industry or any other intermediary. Through attacking, we find joy, courage, and strip the veneer of impenetrability held by these violent institutions,” they added.

Jane’s Revenge has said it carried out attacks against a number of pro-life institutions since a leaked draft opinion indicated that the Supreme Court is poised to strike down Roe v. Wade, the 1973 ruling concluding access to abortion is a constitutional right.

One of the first attacks came against Wisconsin Family Action, a pro-life group based in Madison. Arson destroyed a portion of the building, which was unoccupied at the time.

Jane’s Revenge said afterward that it was opposed to being “forced into childbirth without consent” and demanded “the disbanding of all anti-choice establishments, fake clinics, and violent anti-choice groups within the next thirty days.”

That time passed on June 9, triggering the latest statement.

Few, if any, arrests have been made despite the sharp rise in attacks against pro-life groups in the wake of the draft leak.

Sixteen U.S. senators sent a letter (pdf) to Attorney General Merrick Garland earlier in June, saying they were “deeply concerned” the attacks would continue unless the federal government took a strong public stance and undertook a proactive response.

They urged the department to share details about its strategy of preventing violence and threats of violence against the groups, and what part it has played in investigating the attacks that have happened.

The Department of Homeland Security declined to comment. The agency on June 7 issued a terrorism advisory that said the United States “remains in a heightened threat environment” and that in the coming months, “several high-profile events could be exploited to justify acts of violence against a range of possible targets.”

The Department of Justice did not respond to a request for comment.

It remains unclear when the Supreme Court will issue the finalized opinion that could deal a blow to Roe v. Wade. The nation’s top court released 11 opinions on Monday and Wednesday, but not the one for Dobbs v. Jackson.