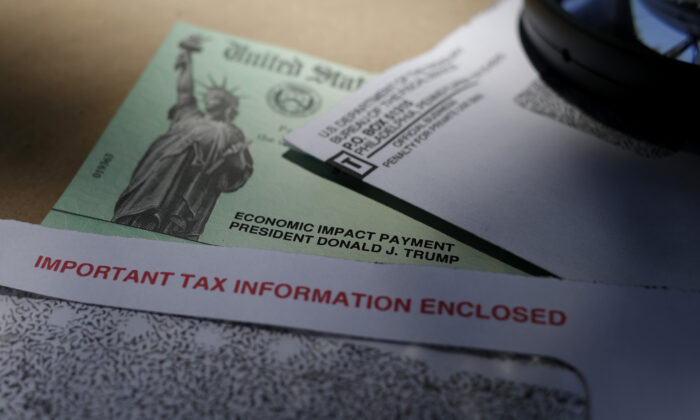 A stimulus check issued by the IRS to help combat the adverse economic effects of the COVID-19 outbreak, is seen in San Antonio, Texas, on April 23, 2020. (Eric Gay/AP Photo File)
Economy

More than 140 homeless people in Denver will be given up to $1,000 per month for up to one year as part of a basic income program, according to an announcement from the city in.

“Just as important as housing and shelter is a regular source of income for those experiencing homelessness,” Mayor Michael B. Hancock, a Democrat, said of the program. “This direct cash assistance will help more than 140 women and families currently in shelters move into stable housing, and provide support, so they can stay housed while opening space in our shelters to serve more people.”

Homeless people who are eligible have to be using the city’s shelter program, the city said.

According to the news release, the cash will be given monthly to “140 women, transgender and gender non-confirming individuals, and families in shelters.” The release did not mention homeless men.

A release issued by the city said that the $2 million to fund the program was sourced from the American Rescue Plan Act, which was backed by President Joe Biden and Democrats. The plan, which totals nearly $2 trillion, was signed into law in March 2021.

“The program will be evaluated by University of Denver’s Center for Housing and Homelessness Research using a randomized control trial, which will measure housing outcomes, utilization of shelter and other homeless services, improvements in psychological health and substance use for those who opt-in,” said the news release.

Late last month, the City of Los Angeles initiated a similar program and will give 1,000 residents $1,000 per month. It doesn’t apply to homeless people, and the recipients were chosen randomly out of more than 180,000 people who applied.

“Given the huge number of L.A. County residents who applied, it’s abundantly clear that a guaranteed basic income is an idea whose time has come,” Supervisor Sheila Kuehl said. “I’m confident that we will see what other pilots have already shown: that a guaranteed basic income, by giving people a bit of financial breathing room, allows them to stabilize their lives and that of their family.”

But a report issued in 2019 from a union group found that around the world, universal basic income programs don’t work well in the real world.

“Making cash payments to individuals to increase their purchasing power in a free-market economy is not a viable route to solving problems caused or exacerbated by neoliberal market economics,” the report said, adding that at the time, there was no evidence such programs achieved longstanding well-being anywhere it has been tried.