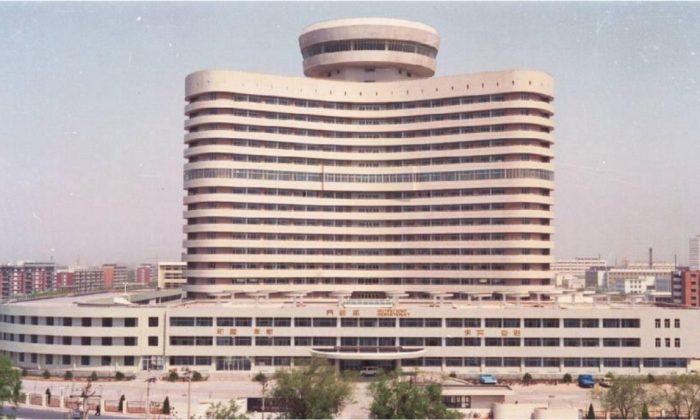 A criminal case involving unauthorized organ procurement surgery conducted in an unlicensed ambulance in China is casting a spotlight on Beijing’s continued efforts to cover up its state-sanctioned practice of harvesting organs from prisoners of conscience.

Last July, four doctors from eastern China were sentenced in China to between 12 and 28 months in prison after being found guilty for their roles in illegally extracting the liver and two kidneys of Li Peng, a hospital patient, after her death.

Their case was reported by state-run media and not censored, indicating that the Chinese regime was seeking to use the story to deflect attention away from its state-sanctioned practice of forced organ harvesting, according to an expert on the issue.

According to China’s state-run media, Li’s liver ended up at a military hospital in Beijing for transplant, and her kidneys went to a hospital in neighboring Tianjin. Both hospitals have been identified by a U.S.-based nonprofit as suspected centers for the forced extraction of organs from living political prisoners.

The doctors, as well as two other accomplices, were charged after Li’s son, Shi Xianglin, alerted authorities that his mother’s donation record was not registered in China’s official donation database, the Chinese media stated. It said Shi began to suspect something was amiss after he discovered that his cousin Shi Zijun was paid 200,000 yuan (about $30,780) two days after his mother’s organs were removed. Under China’s official organ donation program, donors are not to be compensated, according to Chinese authorities.

The money was reportedly paid by local businessman Huang Chaoyang, who was also sentenced to 10 months in prison last year over his role in the unauthorized organ extraction. According to China’s state-run media, Huang was a businessman selling medical equipment.

The four doctors later appealed their sentences, according to the outlet, arguing that what they did was a “state-endorsed” duty since they were simply following orders from their hospital supervisors.

Li, a 53-year-old woman living in Huaiyuan County in eastern China’s Anhui Province, died at the local hospital, the People’s Hospital in Huaiyuan County, on Feb. 15, 2018. Four days earlier, she had been rushed to its intensive care unit (ICU) after being wounded by her stepson during an ax attack, state-run media said.

On Feb. 12, 2018, after spending a day in the ICU, Li was determined to be in critical condition with signs of imminent respiratory failure.

Yang, a deputy chief physician and director of the hospital’s ICU, was the doctor looking after Li when she was admitted to the unit.

It was reportedly Yang who persuaded Li’s husband and daughter to sign a voluntary organ donation form, after promising that they would be paid, local media said. Initially, Yang promised that the family would be paid 160,000 yuan (about $24,630), but he increased the payment to 200,000 yuan at the demand of Li’s nephew Shi Zijun. Li’s husband and daughter signed the form on Feb. 14, 2018, one day before Li’s death, according to the outlet.

After getting the family’s approval, Yang called Huang Xinli, who worked at a hospital in nearby Nanjing City, about an organ extraction, and Huang made the decision that Li’s organs would be suitable for organ transplantation surgery, local media reported.

At the time, Huang was a chief physician at the Nanjing Drum Tower Hospital, which is affiliated with Nanjing University Medical School. Prior to his employment there, Huang had worked at Jiangsu People’s Hospital, a state-run hospital located in the eastern Jiangsu Province’s capital Nanjing.

According to state-run media, Huang then arranged to have his former colleague Lu Shen, and another doctor, Wang Hailang, remove Li’s organs in an ambulance. Lu was the chief physician in hepatobiliary and pancreatic surgery at the Jiangsu People’s Hospital. Wang was a doctor in stomatology at the Huaibei Miners General Hospital in Anhui.

Li’s organs were removed immediately after her death, but it was unclear where the ambulance was parked when the surgery took place.

The unlicensed ambulance was owned by Ou Yang, who received a sentence of one year and one month in the same trial as businessman Huang Chaoyang and the four doctors. According to China’s state-run media, Ou had bought the ambulance from a government health center in Anhui’s Suzhou city in 2015. Since then, he had gotten a new license plate for the ambulance and began using the vehicle to transport patients from areas near local hospitals.

At the trial at a local court in Anhui Province in July, all four doctors were convicted of the crime of intentional destruction of a corpse.

While Lu was found liable for extracting organs from Li only, the other three doctors were found guilty of engaging in unauthorized organ procurement surgeries on 10 other individuals in Huaiyuan County between 2017 and 2019.

Details about these 10 individuals are not known, but Huang was found to be the main surgeon behind these procurement surgeries. Ou, the owner of the unlicensed ambulance, was also involved in the illegal removal of organs from 7 of the 10 individuals.

The four doctors appealed to an intermediate court in Bengbu, a city in Anhui Province. The court rejected their appeals and upheld the lower court’s ruling in August. The defendants had argued that their actions were authorized as they were following orders from their hospital superiors.

On April 19, Chinese news portals Tencent and NetEase reported that Lu Dahai, an alias for Lu Shen, said that he had appealed his case to the province’s highest court, the Anhui’s Higher People’s Court.

The two hospitals that took Li’s liver and kidneys respectively—the People’s Liberation Army (PLA) No. 302 Hospital and Tianjin First Central Hospital—have been named by the U.S.-based World Organization to Investigate the Persecution of Falun Gong (WOIPFG) for their suspected roles in forcibly harvesting the organs from prisoners who practice Falun Gong.

The PLA hospital has carried out a large number of liver transplant surgeries. According to the WOIPFG, the number of these surgeries reached 310 between April 2005 and April 2010, and 146 between May 2010 and December 2012.

Adherents of Falun Gong, a meditation practice also known as Falun Dafa, have been targeted for persecution by the Chinese regime since 1999. Millions of practitioners have been thrown into prisons, labor camps, psychiatric wards, and other facilities, according to the Falun Dafa Information Center.

In the 2000s, reports emerged that the Chinese communist regime was systematically killing detained Falun Gong practitioners for their organs to use for transplantation. At the time, China didn’t have an official organ donation program, and Chinese officials said organs mainly came from executed prisoners.

Amid the growing scrutiny of China’s organ transplant system, the regime announced that starting Jan. 1, 2015, it would stop sourcing organs from executed prisoners and claimed that it would exclusively rely on a new system of voluntary donations. However, Beijing’s claim was refuted by a 2019 report by a London-based people’s tribunal.

The report concluded, after a year-long investigation, that the stated-sanctioned practice of forced organ harvesting was happening on a “significant scale” in China, with Falun Gong practitioners being the main source of organs.

An investigative report by The Epoch Times in 2016 concluded that tens of thousands may have been killed at Tianjin First Central Hospital, as the hospital carried out more transplants than the supply of organs from executed prisoners could support.

On April 13, the WOIPFG released an investigative report into the Jiangsu People’s Hospital. In November 2018, a doctor at the hospital didn’t deny that they sourced transplant organs from Falun Gong adherents when answering a phone inquiry by a WOIPFG investigator who posed as a Chinese Communist Party (CCP) official. The doctor also said that a liver transplant surgery could be arranged in less than two weeks.

The report also included a 2017 audio recording of a phone conversation between a WOIPFG investigator who posed as someone making inquiries about liver transplant surgeries and an unnamed liver transplant doctor at the hospital. The doctor said an organ could be available in as little as two weeks, a waiting time shorter than that at the nearby Nanjing Drum Tower Hospital.

The Nanjing Drum Tower Hospital is also on WOIPFG’s list of hospitals likely to be involved in forced organ harvesting.

That Li’s case was not censored and was widely reported by China’s state-run media is significant, WOIPFG chair Wang Zhiyuan said in a recent interview with the Chinese-language edition of The Epoch Times.

Wang said that the CCP was trying to use the news to spin a narrative around organ harvesting in China—by trying to create a story that these crimes are all committed by individuals and that it’s the Chinese authorities who are trying to stop them.

In reality, China’s state-sanctioned practice of harvesting organs from prisoners of conscience is an expansive endeavor involving cooperation among government agencies affiliated with the CCP’s Central Political and Legal Affairs Commission, the Chinese military, police units, and military police, as well as regional Party and government agencies, Wang said.

He said the sentences handed down for the doctors were quite lenient because, while the CCP wanted to use the case for propaganda purposes, it also didn’t want to draw too much attention to the matter because the doctors were likely acting on orders from their hospitals.

Organ harvesting in China has attracted greater scrutiny in the West in recent years, especially as the United States and other democracies are stepping up their criticism of the CCP over its array of severe human rights abuses.

In the United States, eight counties in Virginia have passed a resolution condemning China’s ongoing practice of harvesting organs from prisoners of conscience. On April 15, the Texas Senate adopted a similar resolution.

In early March, U.S. lawmakers in both the Senate and House introduced legislation to seek accountability for China’s organ harvesting. If enacted, the bill would allow the U.S. government to impose sanctions on individuals and government officials responsible for organ trafficking or organ harvesting.