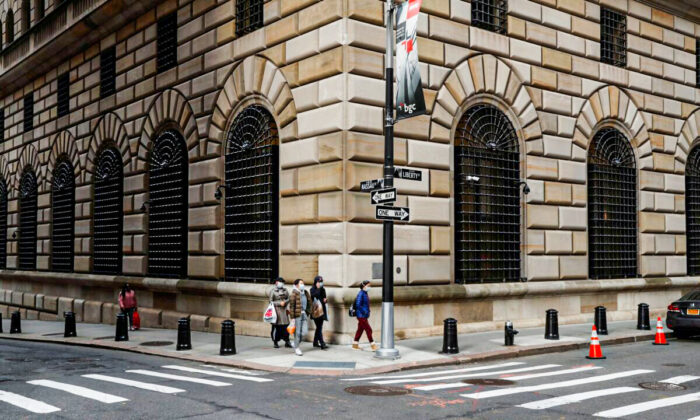 American households saw their debt jump the most in 15 years in the third quarter, due to a surge in credit card use and mortgage balances.

Debt accumulated during that period shot up by $351 billion for the largest quarterly increase since 2007, according to the Federal Reserve Bank of New York on Nov. 15.

This shortly follows the $310 billion rise in consumer debt in the second quarter, for a combined total of $1.27 trillion so far in 2022.

Overall borrowing is now $2.36 trillion higher from levels seen at the end of 2019, before the pandemic hit the economy.

Total U.S. collective household debt has reached a record high of $16.5 trillion, an increase of 2.2 percent from the previous quarter and 8.3 percent from a year ago.

Inflation Begins to Force American Households To Rely On Credit

Rising prices due to record-high inflation rates have forced many consumers to rely more on credit to pay their bills, causing debt to rise over the past year as spending remains strong.

Many economists are still concerned that the Fed’s rate increases will send the economy into a deep recession.

“However, new mortgage originations have slowed to pre-pandemic levels amid rising interest rates,” which have dramatically cooled activity in the housing market.

Credit card balances at the end of the third quarter were up $38 billion from the previous quarter.

Meanwhile, total credit card balances rose over 15 percent year-over-year in the last quarter to $930 billion, its largest annual increase in over two decades, according to the New York Fed, which noted that the surge “towers over the last eighteen years of data.”

Credit card growth was attributed to strong consumption, rising prices, and consumers rapidly spending away the savings that remain in their accounts.

However, the biggest contributor to the latest spike in household debt came from mortgage debts, which rose to $11.67 trillion—$1 trillion more than a year ago.

“Mortgages, historically the largest form of household debt, now comprise 71 percent of outstanding household debt balances, up from 69 percent in the fourth quarter of 2019,” reported the central bank researchers.

Overall mortgage balances during the third quarter rose by $282 billion at the end of September.

Mortgage debt continues to rise amid the sharp spike in interest rates, which has seen the popular 30-year mortgage rate rise above 7 percent.

The rise in consumer-level debt has been tempered so far due to low unemployment, but there has been an increase in delinquencies.

Although the researchers said that “delinquency rates are rising, they remain low by historical standards and suggest consumers are managing their finances through the period of increasing prices.”

Despite the uptick, overall delinquency rates have held steady during the third quarter.

Most of those falling into delinquency tend to be lower-income borrowers at this point and the credit quality for the majority of Americans remained pretty good, according to the New York Fed.

Auto loan balances edged higher to $1.52 trillion this year, as debts saw only a slight increase of $22 billion in the last quarter, up 5.6 percent from a year ago.

Auto loan debt is expected to overtake student loans as the second-biggest liability for American households after home mortgages, as payments and interest on student loans were temporarily frozen during the pandemic.

Delinquency rates for student loans hovered around 4 percent, as debts fell to $1.57 trillion at the end of the third quarter.

Student loan debt hit the lowest level since the second quarter of 2021, due to pandemic-era suspensions for debt repayment.

“The lower level of student debt delinquency reflects the continued repayment pause on student loans, which is scheduled to end on January 1, 2023,” the researchers explained.

The New York Fed in September said that the White House’s proposal to forgive student debts could cancel out about half a trillion dollars’ worth of existing debt.

That all depends on legal challenges to the student loan forgiveness plan and if the Democrats retain control of Congress.