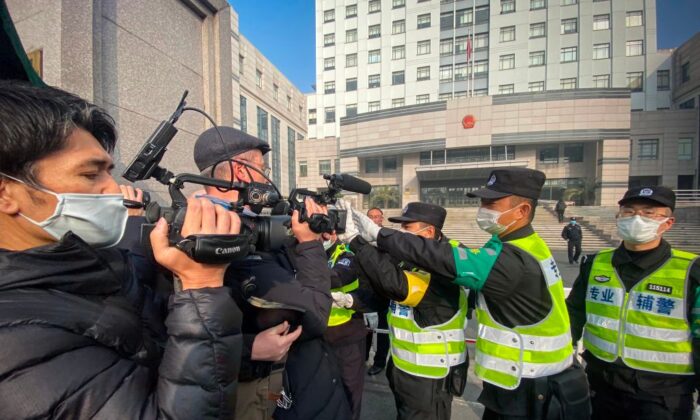 The European Union on Tuesday called on the Chinese regime to release a citizen journalist who was jailed for reporting on the COVID-19 outbreak in Wuhan.

Chinese citizen journalist Zhang Zhan was sentenced to four years in prison on Dec. 28, becoming the first known reporter to be sentenced by Beijing for providing first-hand information about the CCP virus pandemic inside China.

🇨🇳China: Statement by the Spokesperson on sentencing of journalists, lawyers and human rights defenders https://t.co/ZpRTYx9Rgt

In a statement, the EU delegation to China cited “credible sources” as saying that Zhang had been subjected to torture and ill-treatment during her detention and her health condition had seriously deteriorated.

“It is crucial that she receives adequate medical assistance,” said a spokesperson for the EU delegation.

“The restrictions on freedom of expression, on access to information, and intimidation and surveillance of journalists, as well as detentions, trials and sentencing of human rights defenders, lawyers, and intellectuals in China, are growing and continue to be a source of great concern,” the spokesperson said.

The EU delegation also raised concerns over the jailing of prominent human rights lawyer Yu Wensheng. On Dec. 13, the Jiangsu Higher People’s Court upheld the first instance court decision on Yu’s case, confirming a four-year sentence without giving to his defense lawyers the possibility to present a defense statement.

The EU called for the immediate release of Zhang and Yu, and of “other detained and convicted human rights defenders” as well as “all those who have engaged in reporting activities in the public interest,” said the EU spokesperson.

Zhang, a 37-year-old former lawyer, arrived in Wuhan, epicenter of China’s pandemic, in early February, and began posting reports on her social media accounts. She was often critical of the measures taken by Chinese authorities in stopping the spread of COVID-19.

She first went missing in May before Chinese authorities confirmed her arrest a month later. Her indictment, which became publicly available in mid-November, showed that Zhang was accused of charges including “distributing false information through text, video, and other media.”

Zhang had been on hunger strike for months before her Dec. 28 court appearance. In a social media post on Dec. 17, lawyer Ren Quanniu wrote that Zhang was so skinny and out of shape that he could hardly recognize her.