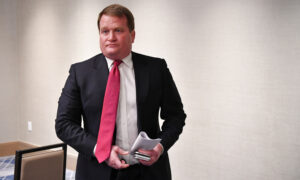 Then-Vice President Joe Biden and his son Hunter Biden at the reviewing stand to watch President Barrack Obama's Inaugural Parade from in front of the White House in Washington on Jan. 20, 2009. (Alex Wong/Getty Images)
2020 Election

Rep. Jim Jordan (R-Ohio), the ranking member of the House Judiciary Committee, said that his staff independently authenticated materials from a hard drive that allegedly belonged to Hunter Biden, the son of former Vice President Joe Biden, while another Republican on the committee agreed with his assessment.

Biden’s campaign has repeatedly denied that the former vice president and current Democratic presidential hopeful knew anything about his son’s overseas business dealings.

Jordan told Fox News over the weekend that it’s “not Russian disinformation,” saying the “emails are real,” before citing a new eyewitness. “Not enough journalists are doing their jobs,” he said of why it isn’t top news everywhere.

Jordan was presumably referring to Tony Bobulinski, whose name and email appear in the recipient list of an email purportedly shared among the Bidens and others, as the eyewitness in question. He said there was a deal outline between Chinese energy firm CEFC and the Biden family. He said he had been sent a copy of the email published last week by the New York Post, which detailed proposed payout packages and equity shares.

Rep. Doug Collins (R-Ga.), another member of the Judiciary Committee, also told Fox News that Biden or his family have “never denied the authenticity” of the messages, adding that what Jordan’s staff found “was true.”

Earlier in the week, Jordan said, “Our staff has had numerous conversations, which have independently confirmed for us that in fact these emails are real, they’re authentic,” according to a conference call. “We’re confident that that is in fact the case, and that these emails are accurate.”

The Epoch Times has not been able to independently authenticate the emails and materials.

An email that was found on the purported Hunter Biden laptop showed that he allegedly tried to arrange a meeting between his father and an adviser to Ukrainian gas company Burisma Holdings, which is the subject of a corruption investigation in Ukraine.

Jordan alleged that “Hunter Biden cashed in” and “Joe Biden is compromised, and of course the former vice president misled the American people when he said he had no knowledge, no understanding of what his son was up to in his international business dealings.”

Biden’s campaign on Thursday denied a meeting between him and the Burisma executive ever took place and has repeatedly denied he knew anything about Hunter Biden’s overseas business.

“As Chris Wallace said on the air about this very smear, ‘Vice President Biden has actually released his tax returns—unlike President Trump—and there is no indication he ever got any money from anybody in these business deals,’” Biden campaign spokesman Andrew Bates told news outlets on Thursday.

He added that Biden “has never even considered being involved in business with his family, nor in any overseas business whatsoever,” writing that “he has never held stock in any such business arrangements nor has any family member or any other person ever held stock for him.”

Biden, his campaign, and his Democrat allies in Congress have also suggested that the email revelations are part of a Russian disinformation campaign. Biden made that claim when Trump brought up the emails and the “laptop from hell” during the final debate.

Director of National Intelligence John Ratcliffe told Fox News last week that the emails are not Russian disinformation, while the FBI later added that it has nothing to add to Ratcliffe’s statement.

The new focus on Hunter Biden and his overseas business dealings by President Donald Trump’s reelection campaign was described as “crass” by Biden during an interview on Saturday.

“I’m running against Donald Trump, not his children, and the American people want to hear about their families, not about Trump’s family or my family, although I’m very proud of my family. It’s just not how I was raised. It’s that basic. It’s Donald Trump,” he said.