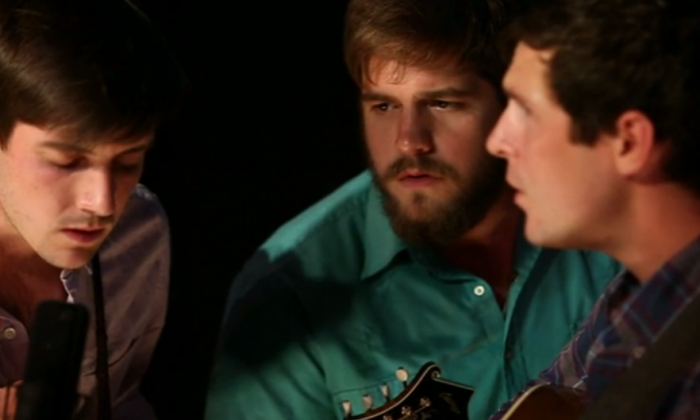 A still from “Mipso In Japan,” directed by Jon Kasbe, screening at NYCPSFF. (Courtesy of NYCPSFF)
Entertainment

‘Mipso:’ A Bluegrass Band in Japan

In “Mipso,” a tiny short-film at the New York PictureStart Film Festival, some Japanese folks would appear to have had a very recent incarnation as Appalachian mountain-folk. I mean they have a serious love of, and a high level of proficiency at—bluegrass music. Who knew?

Mipso, a bluegrass group of guitar, bass, banjo, and mandolin-playing Americans; croon into the microphone in exquisite three-part harmony, on what appears to be a small-ish bar stage. When the song is done, there’s… crickets. Is this silence a form of Japanese culture? All of a sudden applause erupts, and, nope, they’re good. They were having a moment. Of stunned tribute-paying. The Japanese are connoisseurs.

We follow the members of Mipso through photo-ops, DVD-signings, jam sessions, Japanese-bidet testing; “I feel violated a little bit,” says one musician. And the soundtrack plays—what else? Bluegrass.

At some point though you realize, when you hear what would normally be a Smokey Mountain twang come out with a distinctly Asian vowel-bending nasality, that you’re listening to the Japanese version. The music, though? It’s exactly the same as played down around West Virginia. Of course it is.

The film is sectioned into chapters, such as “Food,” and “Culture,” and so forth. In “Culture,” they stare at a Japanese sand garden, and murmur, “different…” They hang in the sauna, go dancing, all while mingling, texting, arm-wrestling, and selfie-ing with fans.

What’s most fascinating about this filmlet, is what never ceases to amaze about music films in general. World-class musicians, like world-class actors (any kind of master-level artist, really), transcend all confines of race and culture. They are a tribe unto themselves, regardless of color and creed. That’s always stunning to witness. It transcends humanness in some way.

And before you know it—it’s over. Welcome to the world of the short film. Just a little taste. Leaves you wanting more.