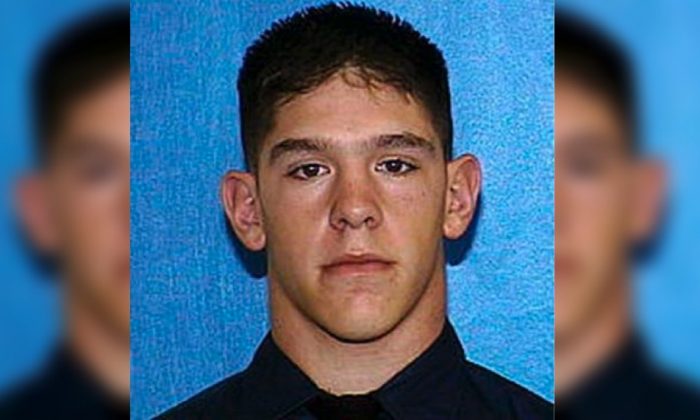 Milwaukee Officer Killed While Serving Warrant Has Been Identified, Suspect in Custody

A Milwaukee tactical officer died in the hospital on the morning of Feb. 6 after being shot while executing a search warrant.

“This is a very, very, very difficult time for our city, for the Milwaukee Police Department, obviously for the family that’s been affected, and we ask for your prayers at this time,” Milwaukee Mayor Tom Barrett said, according to WISN. “I am filled with sorrow over this needless loss. At the same time, I am filled with anger at the individual who took the life of this police officer.”

Rittner, 35, was a member of the Milwaukee Police Department’s Tactical Enforcement Unit, which was conducting a search warrant on someone wanted for illegally selling firearms and drugs, Sgt. Sheronda Grant said in a news release on Feb. 6.

The suspect fired several rounds after officers announced themselves as police. Rittner was struck by gunfire. Residents near the scene told Fox affiliate WITI they heard several gunshots ring out.

Rittner was rushed to Froedtert Hospital, where he succumbed to his wounds. He is survived by a wife and child.

“This is the third time in eight months that I’ve had to stand at a podium and talk about the loss of a life of a police officer,” Barrett told reporters, WTHR reported. “We need all residents of this community, all residents of this state, to be thankful and appreciative of every single law enforcement official in this state.”

Assistant Police Chief Michael Brunson was cited by Fox News as saying that Ritter “was well-loved by everyone on the department,” adding that the loss was “tragic and impactful” for the Milwaukee Police Department.

Grant noted in the release that prior to the three officer deaths in the recent eight-month period, the Milwaukee Police Department had gone “approximately 22 years without a line of duty death.”

The suspected gunman, identified as a 26-year-old Milwaukee man named Jordan P. Fricke, was taken into custody without incident, the department said in a statement.

“The members on scene utilized tremendous restraint during the suspect’s apprehension, which is a true testament to the character and professionalism of the men and women of the Milwaukee Police Department,” Morales said.

Morales said Fricke was wanted for illegal sale of firearms and drugs.

Rittner, who has a record of service in the U.S. Marine Corps, began his career as a police aide in 2001. He was part of a team that helped free hostages on two separate occasions in one month in 2015.

He and his colleagues confronted a gunman who had tied a man and woman with electrical cords in a basement on Dec. 7, 2015. The gunman had threatened to kill the hostages when police rushed into the basement. The suspect was apprehended and the hostages weren’t harmed.

Then on Dec. 27, 2015, Rittner was part of a team that responded to a hostage situation where a man was holding a woman at gunpoint. The suspect surrendered but officers noticed smoke coming from the home and feared there was a fire. The officers went into the house and found the woman in the bathroom.

The officers received awards for bravery and courage in both cases.

Six months ago, Officer Michael Michalski was fatally shot while trying to arrest a convicted felon wanted on drug and domestic violence offenses. Last June, 23-year-old Officer Charles Irvine Jr. was killed in a squad car crash during the high-speed pursuit of a suspect. Irvine was the first Milwaukee officer killed in the line of duty since 1996.

“I am filled with sorrow over this needless loss and at the same time I am filled with anger at the individual who took the life of this police officer,” Barrett said. The mayor said the officer “was doing his job” and “working to make our city safe” when he was killed.