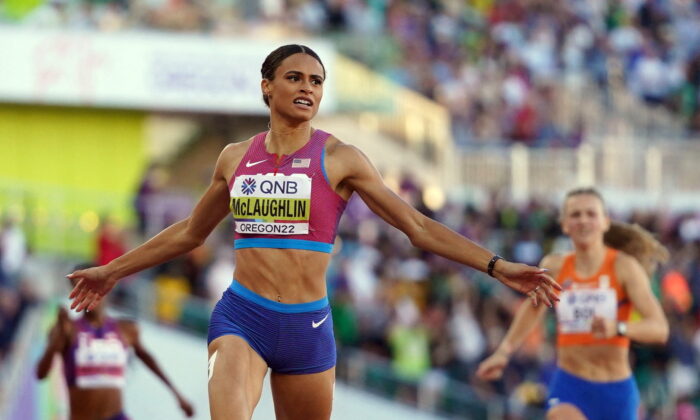 Sydney McLaughlin of the U.S. crosses the line to win the women's 400 meters hurdles final and set a world record on day eight of the World Athletics Championships Oregon22 at Hayward Field in Eugene, Ore., on July 22, 2022. (Lucy Nicholson/Reuters)
Sports News

EUGENE, Ore.—American Sydney McLaughlin produced one of the greatest track performances of all time on Friday by shattering her own 400 meters hurdles world record to win World Championships gold.

The Olympic champion charged home in 50.68 seconds, slashing 0.73 off her previous mark of 51.41 set at the same springy Hayward Field last month and becoming the first woman to run under 51 seconds in the event.

“We knew warming up that it was going to be one of those days,” McLaughlin said after winning her first individual World Championships title.

“I knew coming home that if I just kept my cadence and stayed on stride pattern, we could do it and it happened.”

It was the sixth time in three years that the world record has been broken, after Russian Yulia Pechonkina’s mark had stood for 16 years.

“The level in the 400m hurdles is certainly improving,” said McLaughlin. “We have a full group of girls that are willing to push our bodies to the next level and we are seeing times drop. It’s really an exciting time to be in the event.”

McLaughlin charged out of the blocks and by the 100 meters mark already had the lead over Muhammad, who had held the world record as recently as June 2021.

McLaughlin built a comfortable gap before the back turn and finished several meters clear of Bol and Muhammad, the home crowd in Eugene, Oregon, erupting as the 22-year-old powered to the line.

Bol, who took bronze in Tokyo, said McLaughlin’s dominance made her question her own performance.

“She was so far in front at the end so I was always doubting if I really had a good race because it felt very good. And then I saw the sign and I was like: Wow,” she said.

“This is just amazing and it means a lot that she also broke the 51s barrier.”

Much of the hype heading into the final had focused on McLaughlin’s rivalry with 2019 champion Muhammad but the 32-year-old was left disappointed after coming back from a mild hamstring injury earlier this year.

“I’m having mixed emotions to be honest,” she told reporters.

“I’m proud of the way we had this moment. I definitely want to keep this season going. I knew that at this race I wasn’t quite at my best but I was hoping for the best.”

It was the first world record broken at this year’s World Championships, the first on U.S. soil, and a much-needed boost for the American women, who have excelled in the field events but had been shut out on the track.

“She’s just special,” Allyson Felix, the most decorated woman in track, wrote on Twitter. “In a class of her own.”

McLaughlin said she enjoyed pushing herself to new highs.

“It’s very special to push boundaries for myself, focusing on the 10 hurdles and to be able to improve upon that, what else could I ask for?” she said.