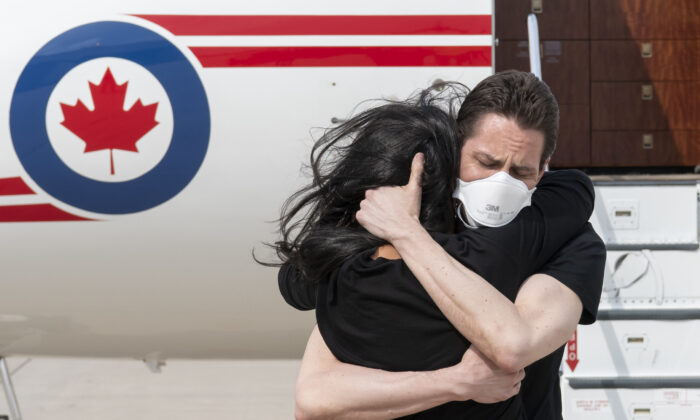 Michael Kovrig: ‘It’s Fantastic to Be Back in Canada’

Michael Kovrig expressed his gratification for finally being back in Canada as he arrived in Toronto Saturday afternoon, after having been arbitrarily detained in Chinese prisons for over 1,000 days.

“It’s fantastic to be back in Canada, and I’m immensely grateful for everybody who worked so hard to bring [me and Michael Spavor] back home,” the former diplomat told reporters at Toronto Pearson International Airport.

“We’ll have much more for you later,” he said.

Kovrig and Spavor landed in Calgary early on the morning of Sept. 25 after the Beijing regime released the two on Sept. 24 in a deal that saw Huawei chief financial officer Meng Wanzhou allowed to return to China the same day.

After they touched down in Calgary aboard a Royal Canadian Air Force Challenger jet, Prime Minister Justin Trudeau and Global Affairs Minister Marc Garneau personally greeted them at the airport.

Spavor remained in Calgary where his family lives, while Kovrig continued on to Toronto.

After Kovrig embarked from the plane in Toronto, he and his wife, Vina Nadjibulla, hugged and cried. He then hugged his sister Ariana Botha.

The three posed for photos with the military crew and Canadian ambassador to China Dominic Barton, who had accompanied Kovrig and Spavor on the flight from China, before speaking to reporters very briefly and then leaving in a black SUV.

Kovrig and Spavor had been held captive in China since Dec. 10, 2018. Their detention came a few days after Meng was arrested in Vancouver on Dec. 1, 2018, on a U.S. extradition request. Prior to their detention, Beijing had warned Canada of dire consequences if Meng was not released.

During the early stages of their imprisonment in China, the two men were held in solitary confinement and underwent repeated interrogation. The lights were kept on in their cells day and night which can lead to sleep deprivation, recognized as a form of torture by human rights organizations.

Meng, who was charged with bank and wire fraud relating to violating U.S. sanctions on Iran, reached a deferred prosecution agreement with the U.S. Justice Department on Sept. 24. A Canadian court lifted her bail conditions on the same day, allowing her to leave Canada.