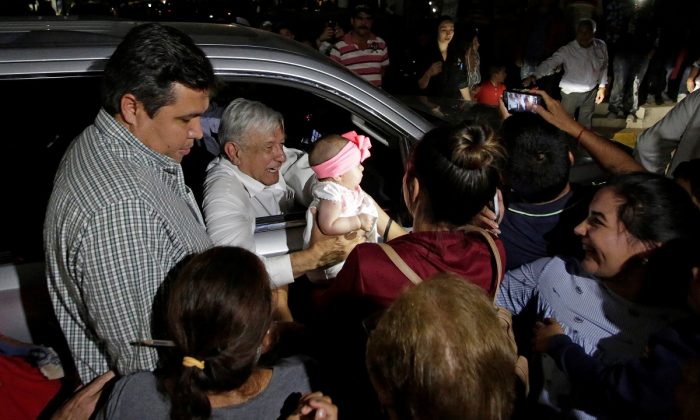 Speaking to a crowd in Badiraguato, a mountainous municipality in the northwestern state of Sinaloa long associated with cartels, Lopez Obrador said people must not be “stigmatized.”

“(The people of) Badiraguato are good people, they are hardworking people,” he told a cheering crowd in a public square. “We must seek reconciliation, we must find peace.”

Though warring gang factions have inflicted periodic bloodshed on the municipality, some villagers speak fondly of the largesse of their native son, who was born in the hamlet of La Tuna and whose Sinaloa cartel provided work for marijuana and opium poppy growers.

With a population of 32,000, Badiraguato is one of the poorest municipalities in the state of Sinaloa and the country, according to Mexican statistics agency Inegi.

Lopez Obrador, who has spoken of the need to fight poverty across Mexico, announced a development plan for Badiraguato that included a new highway, a public university and a program to plant trees.

El Chapo is not the only drug lord who calls it home—Rafael Caro Quintero and Ernesto Fonseca Carrillo, both former leaders of the Guadalajara cartel, were also born nearby.

If El Chapo returned to Badiraguato it would be a relief for its inhabitants because, according to them, there was neither poverty nor violence when he was there. https://t.co/a1YLYRunAn

In a district where 70 percent of residents live below the poverty line, the capos emerged as unlikely benefactors, building roads and buildings, locals say.

That may explain why some found Lopez Obrador’s visit, coming after El Chapo’s conviction on smuggling tons of drugs to the United States, so significant. With the drug lord behind bars, and facing a probable life sentence, Badiraguato will need a new champion.

Several residents said they were cautiously optimistic about Lopez Obrador’s plans and eager to work on the projects.

“With the university, my family is no longer going to have to travel to study elsewhere,” said de la Rocha, the farmer, leaning on his shovel in front of a huge sign welcoming Lopez Obrador.