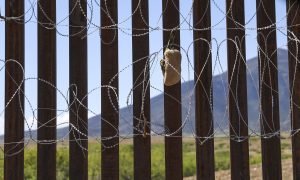 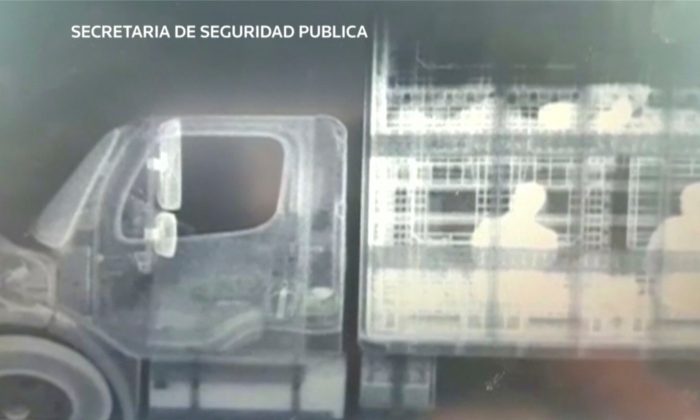 Migrants are seen in a tractor trailer after being detected by police X-ray equipment in Concepcion del Oro, Zacatecas state, Mexico, on July 7, 2019. (Secretary of Public Security/Handout via Reuters)
Americas

MEXICO CITY—Mexican officials using a large X-ray scanner at a checkpoint in the central state of Zacatecas found 51 Central American illegal immigrants in hidden compartments inside a truck.

Footage of the X-ray shows a ghost-like truck filled with the brightened silhouettes of the illegal immigrants, some sitting, others lying down along two levels in the crowded compartments.

Mexican authorities scanned the vehicle and moved the migrants into processing facilities.

The illegal immigrants from Guatemala, Honduras, El Salvador, Nicaragua, and Ecuador, 21 of whom were minors, are now in the custody of the country’s National Migration Institute (INM), government officials said in a statement late on July 7.

The illegal immigrants will be returned to their home countries, the statement said.

The apprehension comes weeks after the appointment of hard-charging former prisons chief Francisco Garduno as the new head of the INM. Under Garduno, the immigration authority has made a number of high-profile captures of illegal immigrants smuggled in vehicles.

The INM’s former chief official, an academic recognized for his work on immigration policy, left his position in mid-June amidst tensions over a June 7 deal with the United States under which Mexico averted tariffs threatened by U.S. President Donald Trump.

In another video of the X-ray-assisted detention released by Mexican authorities, an official approached the cargo vehicle at night to open the door to one of the crates. He identified himself as a police officer and asked if the illegal immigrants were in good health.

The truck, the driver, and 225,000 Mexican pesos ($12,000) in cash found in the vehicle are now in police custody, and will be subject to investigation, INM said.

“It is our strategic objective to end the impunity for human traffickers,” Ebrard said, at a news conference on Monday.