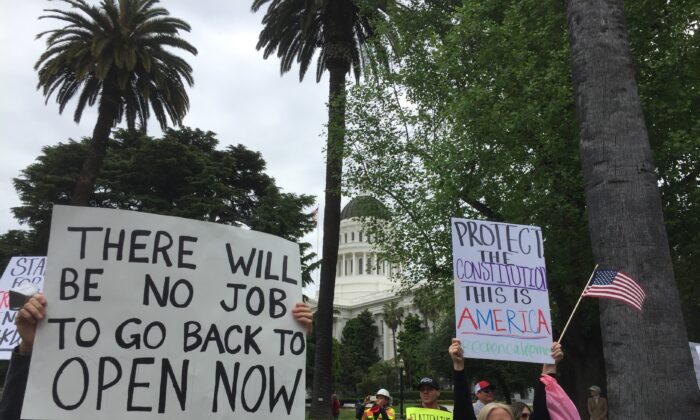 Hundreds of gather around the California State Capitol to protest against the statewide lockdown in Sacramento on April 20, 2020. (Laurie Gorham/The Epoch Times)
Viewpoints 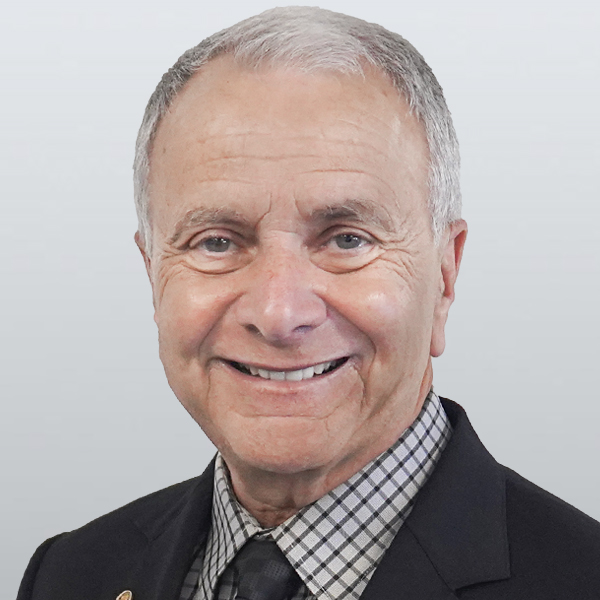 In their attempt to control the spread of COVID-19, California and Florida followed sharply different strategies.

While California used a wide array of restrictive mandates, Florida used a targeted approach that focused on those segments of society more vulnerable to the lethal effects of COVID-19. The conventional wisdom is that California’s strategic response to COVID-19 came at a high economic cost, but as compared to Florida, it resulted in many lives saved. That “wisdom” is only half correct.

There’s no doubt that California’s broad-based use of mandates led to a sharper loss in overall economic activity than Florida’s more targeted approach. The extent to which each state used mandates can be quantified by referring to Oxford University’s Stringency Index, which measures on a daily basis, using a scale from 1 to 100, 11 different statewide policy interventions.

Over the period of January 2020 to July 2022, California’s average Oxford University Stringency Index “score” was 43, placing it fourth highest of all 50 states. In sharp contrast, Florida’s average index was 27, placing it far lower at a rank of 40. Not surprisingly, in light of its significantly higher average stringency, California lost more jobs than Florida on a relative basis. California’s non-farm job total is still lower than its pre-recession high, while Florida’s is 3 percent higher. That translates to California losing 43,000 jobs, while Florida gained 280,000 jobs over the same time period.

Even more striking is a comparison between the two states when the gap in their stringency scores was at its widest. In January 2021, when California’s stringency index hit a high of 63, the state had shed 10 percent of its jobs—double the 5 percent loss in Florida, which had a stringency index of 32, roughly half of California’s. During that month, California’s unemployment rate was 9.2 percent versus Florida’s 6.1 percent.

It should be noted that in spite of the fact that California experienced a greater relative job loss, Florida has a higher proportion of workers than California in the job sector hardest hit by the pandemic: leisure and hospitality.

These findings aren’t unique to California and Florida. In other research I’ve done, I showed that the 10 states with the lowest stringency scores between January 2020 to March 2022 had, on average, 1 percent more jobs than pre-recession levels. In sharp contrast, the 10 most stringent states—a group that includes California—had, on average, 2 percent fewer jobs.

These comparisons using unadjusted COVID-19 death rates, however, are highly misleading. California’s population is the seventh-youngest out of all 50 states, at a median age of 37 in 2020. That compares to Florida, which ranks as the fifth-oldest state with a median age of 43 years.

When it comes down to the incidence of COVID-19 deaths, age matters—it matters big time. Although only 16 percent of the U.S. population is older than the age of 65, that age cohort accounts for almost 75 percent of all COVID-19 deaths. The fact that California has 15 percent older than the age of 65 while Florida has 21 percent clearly makes Florida more vulnerable to the lethal effects of COVID-19.

To adjust for these age differences, statisticians use age-adjusted data that basically convert statewide differences in ages so that they conform to the age cohorts of the United States. When I used that procedure to adjust California’s and Florida’s COVID-19 death rates, California’s age-adjusted death rate of 261 per 100,000 was roughly the same as Florida’s rate of 267 per 100,000.

Using an alternative age-adjustment statistical metric that measures excess deaths as a percentage of expected deaths over the period of March 2020 to March 2022, researchers found that California and Florida had the same excess death rate of 18.8 percent.

These empirical results suggest that California’s use of broad-based mandates as compared to Florida’s more targeted strategy—a strategy that came at a great economic cost to California—had no measurable impact on lives saved.

An example of Florida’s targeted strategy is its tough lockdown on visits to the state’s long-term care facilities, a policy that effectively placed these facilities in quarantine. The impact of this approach can be seen in statistics that show the cumulative COVID-19 death rate for those 75 to 84 years old was 1,606 per 100,000 in California as compared to a lower 1,279 per 100,000 in Florida. Even more dramatically, the COVID-19 death rate for those 85 years and older was 4,055 in California versus 3,087 in Florida. Florida’s more stringent targeted strategy for safeguarding the elderly largely explains why California and Florida’s age-adjusted COVID-19 death rates are roughly the same.

An example of the ineffectiveness and the high cost of California’s broad-based lockdown strategy is its closing of almost all of its public schools. A ranking of the percentage of cumulative in-person education shows that California ranked last of all 50 states at 19.2 percent. That compares to Florida’s 96.2 percent—the third highest in the nation (pdf).

An Organization for Economic Co-Operation and Development estimate puts the COVID-19 era losses in lifetime earnings for a student denied in-person education at 3 percent (pdf). These losses in foregone earnings will have their greatest negative impact on students from low-income families, a loss that came with no discernable benefit in lives saved. Total COVID-19 deaths in the 5 to 14 age range cohort were 23 in California and 27 in Florida. Compare those numbers to the COVID-19 deaths for those 85 years and older of 23,116 in California and 17,319 in Florida.

Even though Florida Gov. Ron DeSantis was widely attacked for what many claimed to be the state’s lax stringency mandates, a careful examination of the data suggests that Florida’s policies were more effective than California’s. An important lesson that emerges from this comparison is that targeted state regulations that more carefully evaluate their potential benefits and costs are more effective than broad-based policies that have more indiscriminate effects.