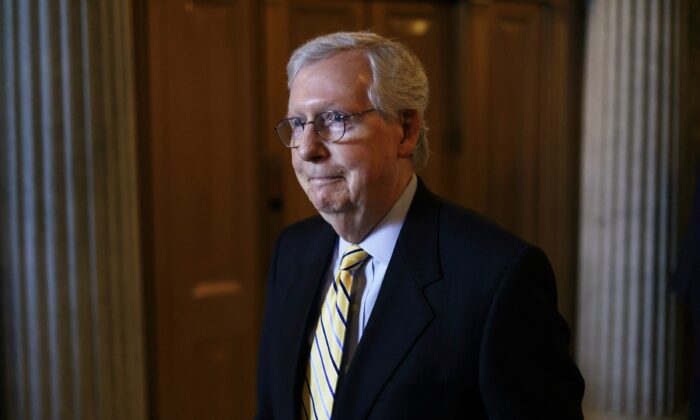 McConnell: Flipping House, Senate in 2022 Would Force Biden to Be a Moderate

Republicans regaining control of the House of Representatives and the Senate in the 2022 midterm elections would put them in a position to check President Joe Biden, a Democrat, the top Republican in the Senate said Thursday.

“What direction we take is largely going to be decided by the election in 2022,” Senate Minority Leader Mitch McConnell (R-Ky.) told the Northern Kentucky Chamber of Commerce.

President Joe Biden vowed on the campaign trail to govern as a moderate but quickly moved away from that pledge, issuing a flurry of executive orders opposed by most Republicans and backing his party’s play in Congress to ram through a $1.9 trillion package that included COVID-19 relief with zero GOP support.

McConnell said when he made remarks last year that he could guarantee Biden would be a moderate, he thought he would remain majority leader. Instead, Democrats won both Senate runoff elections in Georgia, giving them control of the 50-50 upper chamber through Vice President Kamala Harris’s ability to cast tiebreaking votes.

With Democrats barely having control in each chamber, McConnell alleged Biden has “misread the mandate” from voters.

“I don’t think the American people voted for all of this, but they have narrow control here for the next year and a half. And the American people, I think, have to make a big decision in 2022—do they really want a moderate administration or not?” he told the chamber.

“The American people right now have given us, I think, a 50/50 government. It could go either way. And I think the ’22 election will be an example for the administration to get a report card, a midterm report card,” he added later.

Biden and White House officials have generally blamed Republicans for how his term is going so far, accusing GOP lawmakers of refusing to come to compromises on major issues like infrastructure and election reform.

The 2022 elections will see voters decide on who will hold 34 Senate seats, including 20 currently held by Republicans. Every seat in the House is up for grabs, since terms are only two years.

If voters do hand control of Congress back to the GOP, that would not mean nothing gets accomplished. McConnell pointed to how the parties came together to pass multiple relief packages in 2020, among other pieces of legislation that drew bipartisan support and a signature from former President Donald Trump.

“What I want you to know is if I become the majority leader again, it’s not for stopping everything—it’s for stopping the worst,” McConnell said. “It’s for stopping things that fundamentally push the country into a direction that at least my party feels is not a good idea for the country. And I could make sure Biden keeps his promise [he made] in ’20 to be a moderate.”