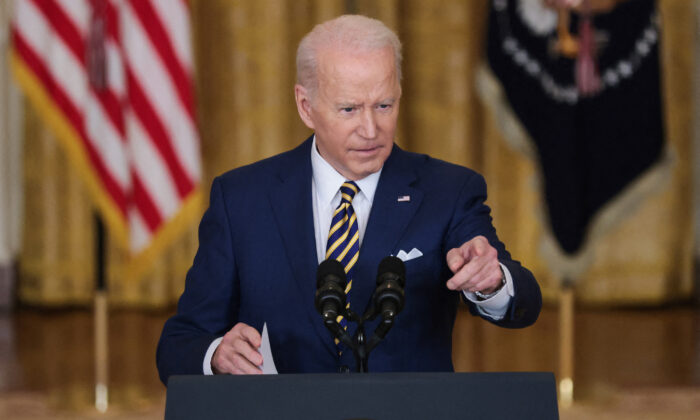 President Joe Biden speaks during a press conference in the East Room of the White House in Washington on Jan. 19, 2022. (Abaca Press)
Viewpoints

The art of deconstructing an argument by refutation and holding a person accountable for previous statements that the person now contradicts was once an honored tradition. It has now mostly gone the way of other traditions in favor of sound bite statements formulated in political party meetings and used to confuse the public.

Senate Minority Leader Mitch McConnell (R-Ky.) unpacked this once great technique when he responded to some of President Biden’s outlandish claims over his first year in office that included his inaugural address and remarks made at his news conference last week and in an Atlanta speech about minority voting rights.

McConnell said the Biden on display at these events was not the Biden he has known for decades. Anyone who has known or observed Biden during his 50 years in politics would have to agree.

McConnell began his Senate floor speech by recalling Biden’s promise in his inaugural address to unite the nation. Instead, said McConnell, “that very same man delivered a deliberately divisive speech that was designed to pull our country further apart.”

One year ago, said McConnell, Biden said “we should not see ourselves as adversaries, but as neighbors.” Now he calls “millions of Americans his domestic enemies.”

McConnell noted a year ago the president called for lowering the rhetorical temperature, but now says, “if you disagree with him, you’re George Wallace. If you don’t pass the laws he wants, you’re Bull Connor. And if you oppose giving Democrats … one-party control of the country, well, you’re Jefferson Davis.” He might have mentioned that these, as well as many other elected officials who opposed civil rights legislation, were Southern Democrats and that it was mostly Republicans, beginning with Abraham Lincoln, who supported racial equality.

McConnell went on to recall that Biden has said disagreement must not lead to disunion, but then “invoked the bloody disunion of the Civil War to demonize Americans who disagree with him. He compared a bipartisan majority of senators to literal traitors. How profoundly unpresidential.”

McConnell said he has “known, liked and personally respected Joe Biden for many years. I did not recognize the man at (his news conference).”

The president acts as if he has a mandate for all the far-left policies he has been pushing, but McConnell noted the 50-50 Senate and the bare majority Democrats hold in the House: “the narrowest majorities in over a century” and that “he did not get a mandate to transform America or reshape society.”

McConnell said the president did get a mandate to do one thing: bridge the political divide, lower the temperature, and end “the perpetual era of crisis in our politics.” He has done the opposite.

He called Biden’s “rant … incoherent, incorrect and beneath his office.”

The president again mentioned “Jim Crow 2.0” to assert Republicans are attempting to make it more difficult for minorities to vote, which is untrue. As McConnell noted there are more ways for people to vote in Georgia than Biden’s state of Delaware. Jim Crow laws, it should be noted, were also created by Democrats, a fact the major media regularly ignores.

There is much more in his remarks. His entire 16-minute address can be viewed here.

Too many of today’s “journalists” sound like shills for the Democratic Party, crafting their questions and writing their stories as if they are channeling that party’s talking points and worldview.

McConnell did their job for them in his deconstruction of recent remarks by the president. Polls show Biden voters are expressing buyer’s remorse. They can be expected to reverse course in November.