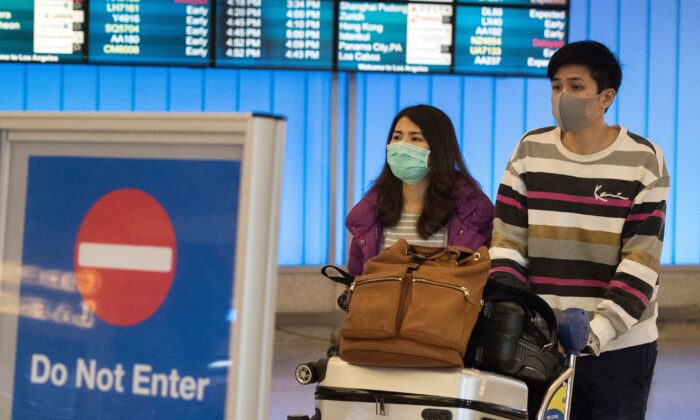 Passengers wear protective masks to protect against the spread of COVID-19 as they arrive at the Los Angeles International Airport on Jan. 22, 2020. (Mark Ralston/AFP via Getty Images)
Southern California

With Los Angeles County health officials announcing last month that masks will no longer be required indoors, a letter surfaced signed by doctors and researchers from the University of Southern California (USC) and the University of California–Los Angeles (UCLA) suggesting that mask mandates were ineffective at preventing the spread of COVID-19 in the county.

The February letter from researchers and medical professionals at UCLA’s David Geffen School of Medicine and USC’s Keck School of Medicine was sent to the Los Angeles County Board of Supervisors asking the board to end mask mandates.

“The time to end local mask mandates is now,” the letter reads.

Data shown within the letter suggest there was a continued increase in COVID-19 cases in the last 7 months of 2021, even though mask mandates were in place during that time.

The letter further references several studies, including one in Denmark and another in Bangladesh, showing that there were no significant impacts on COVID-19 cases between masked and unmasked groups.

“Both the scientific literature and data from Los Angeles County suggest limited or no efficacy of mask mandates in reducing COVID-19 infections,” the letter reads.

Health Deputy Anders Corey for the Los Angeles County Board of Supervisors told The Epoch Times that the doctors’ letter influenced Supervisor Kathryn Barger and her decision to openly oppose mask mandates.

Barger released an open letter (pdf) on July 25 opposing mask mandates in the county, just a few days prior to the county’s Department of Public Health announcing that it wouldn’t enforce a universal indoor mask mandate because of slowing COVID-19 transmission countywide.

“I have not seen any empirical data that conclusively shows that masking mandates make a difference in decreasing or stopping COVID-19 transmission rates,” Barger wrote.

In her letter, she referenced the analysis of mask mandate effectiveness in Alameda County—which dropped its policies just three weeks after instating them, citing no significant impacts on the county in comparison to local counties without masking policies.

“What I have seen, time and time again, is that masking mandates actually distract our collective efforts to decrease COVID-19 infection rates,” Barger wrote.

Since January, Barger has claimed that mask mandates don’t work because they aren’t followed or enforced.

“Individuals should be allowed to make an informed choice about whether to mask up or not,” she said in a statement.