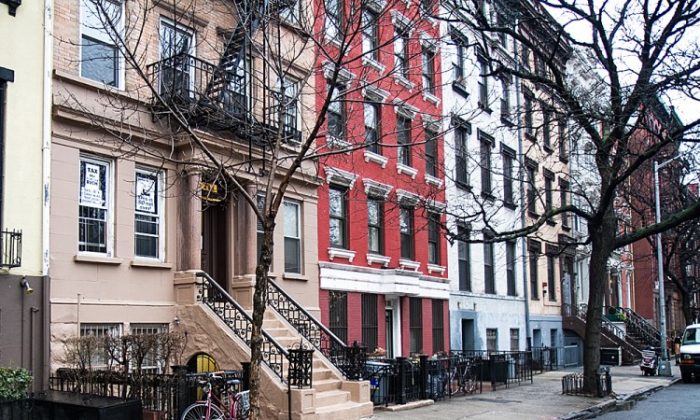 Apartments on East 10th Street including building 315 are shown across from the Tompkins Square Park on the Lower East Side of Manhattan. (Benjamin Chasteen/The Epoch Times)
NY Real Estate

NYC real estate sales prices rose to a record high through the first half of the second quarter with rising prices and strong sales, exceeding the previous record set in the same period three years ago.

The median sales price in Manhattan rose by 10.6 percent, to a record $1.25 million, while the number of sales increased to the highest total for a second quarter since 2007, with over 3,800 closings, according to data from Douglas Elliman and Miller Samuel.

The first quarter saw 3,585 sales in the borough, up 45.9 percent year over year and 48.9 percent above pre-pandemic levels, with sales of residential real estate hitting a record $7.3 billion.

The median co-op price at the end of the last quarter, hit an all-time high of $865,000, while the median price for condos reached a record of just under $1.9 million.

However, most of the rise in real estate closings was negotiated in the earlier part of the year, when mortgage rates were not as high.

The Manhattan realty market started to take a dive in June, realtors noted, as stocks and crypto took a hit and rising interest rates started to affect sales.

The downturn toward the end of the quarter saw inventory increase by 15 percent compared to the first quarter and as of the end of June, there were 7,968 active listings.

Oil prices since the start of the second quarter, surged past $100 a barrel, with the stock market reaching bear market territory.

Analysts now expect that the third quarter will more accurately reflect the mood on Wall Street, displaying lower results for the industry, while economic forecasts predicting a recession are shaking potential real estate sales as well.

“This suggests that the current quarter represents a peak period of closed sales activity,” said the Douglas Elliman report.

“The market share of bidding wars fell from the prior quarter’s four-year high of 9.3% to 8.5%, with the average amount of premium paid to fall to 4% from 5.3% over the same period.”

The drop in Manhattan sales is sudden, due to the fact that the market is skewed toward wealthier buyers who are less dependent on mortgages and rising rates.

Cash made up 53 percent of all apartment purchases in Manhattan in the last quarter, with 99.6 percent of purchases above $4 million being cash at the higher end of the scale, according to Miller Samuel.

NYC realtors say that wealthier clients in Manhattan are more attune to financial market sensitivity rather than higher mortgage rates, plus they are becoming concerned about rising crime and higher tax rates.

Besides high-end buyers in the financial sector, those working in tech and venture capital are also holding back on Manhattan real estate purchases, fearing layoffs and corporate cuts.

While prices still remain high, brokers and lending agents are noticing that buyers are showing up less frequently to open houses or showings when compared to a few months ago.

A listing that once attracted 31 people to view an open house, saw similarly a listed open house in June, witnessing only four people showing up, said McKenzie Ryan, a top New York broker with Douglas Elliman to CNBC.

She believes that people “still need the space, but interest rates and economic fears are pushing people to pause.”

“The gradually slowing sales market manifests in all boroughs and at all price points throughout the city,” he said.

“Rates are still significantly higher than they were a year ago, which is why applications for home purchases and refinances remain depressed,” Kan said.

“Purchase activity is hamstrung by ongoing affordability challenges and low inventory, and homeowners still have reduced incentive to apply for a refinance.”