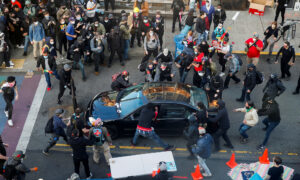 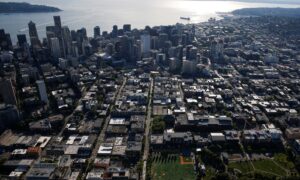 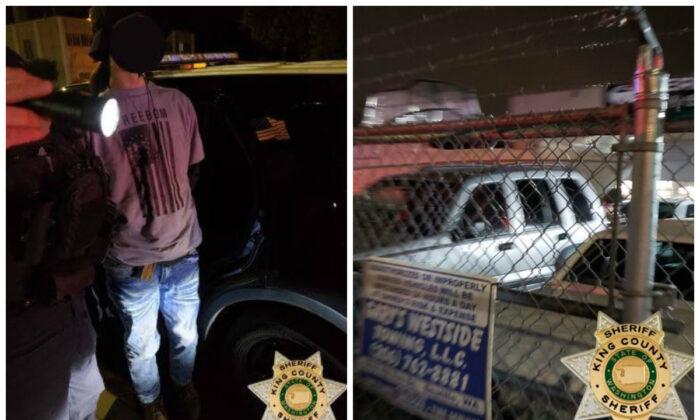 A man accused of breaking into a car repair store near Seattle’s so-called autonomous zone was arrested after allegedly committing another burglary.

Seattle police officers refused to respond directly to the alleged break-in on June 14 at Car Tender, the business, despite being called multiple times.

“Out of recognition of the ongoing demonstrations in the area, officers did not enter the CHOP zone,” the Seattle Police Department said in a statement.

But the suspect was arrested by King County Sheriff’s deputies after being accused of a separate burglary at Eric’s Import and Domestic Auto Services a day after the apparent break-in near the autonomous zone.

Richard Hanks, 21, was taken into custody after climbing over a 10-foot, barbed wire-topped fence into a car lot, the sheriff’s office said.

“After the arrest, Deputies realized the man in their custody was the same man seen on surveillance video breaking in to a business just outside the CHAZ/CHOP on Seattle’s Capital Hill in the early morning hours of … the same day!” the office said in a statement.

Hanks was also detained hours before for “prowling vehicles” at the same dealership, according to the complaint. After the alleged Car Tender break-in, he was arrested for trying to steal a Mercedes at Eric’s Import and Domestic Auto Services, where he claimed that he hopped the fence to try to get his car back that had been impounded.

An Epoch Times reporter who spent nearly a week inside the zone found a lawless area patrolled by self-styled police as legitimate officers stay away. The zone includes a police precinct, which was abandoned earlier this month.

Police officers are only entering the zone for “significant life-safety calls,” Mayor Jenny Durkan, a Democrat, said this week.

Matt McDermott, the son of Car Tender’s owner, told The Epoch Times what transpired early Monday was “really disheartening.” Video footage showed a group of occupiers rushing to the shop after learning an autonomous zone resident was being held inside by workers. They threatened to kill employees if the man wasn’t released. Workers eventually let the man—later identified as Hanks—go, after he refused to be searched.

A group of occupiers chased the suspect down inside the zone and a search there uncovered a jacket that belonged to the shop.

Hanks slipped away after an argument erupted among the occupiers.

According to court documents (pdf, pdf, pdf) obtained by The Epoch Times, Hanks attacked McDermott with a box knife after being found inside Car Tender.

“It slashed through his pants and into his boxers, any deeper and it could have caused major injury or worse due to the defendant’s slashing the victim near his groin,” Aubony Burns, a deputy prosecuting attorney, wrote in the documents.

He was also charged with burglary and theft for another incident at a Mercedes Benz dealership on June 11.

Deputies found Hanks sitting in a stolen vehicle in the dealership, according to a criminal complaint.

When the responding officer approached, Hanks accelerated at the officer before slamming on the brakes. He then reversed, crashing into three parked vehicles and totaling the stolen car.

Officers found four iPads and 30 key fobs in a backpack inside the vehicle.

“His behavior demonstrates a complete disregard for the safety of others and willingness to engage in inherently destructive and dangerous behavior, both for himself and responding law enforcement,” Stephen Anderson, deputy prosecuting attorney, wrote in court papers.

Hanks’ criminal past includes a conviction this year in Washington state for attempted robbery and a conviction in Hawaii in 2018 for theft. Hanks was booked into King County Jail.