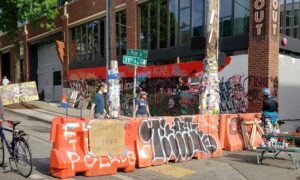 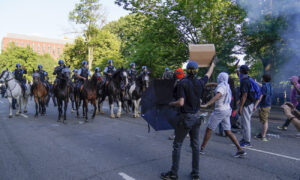 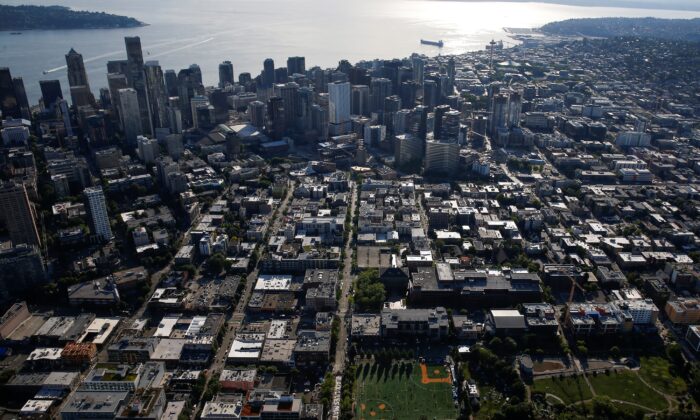 The so-called Seattle autonomous zone is seen in an aerial picture, in Seattle, Wash., on June 11, 2020. (Lindsey Wasson/Reuters)
US News

Update: The suspect was arrested for a separate burglary a day after the break-in.

Chaos erupted near the so-called autonomous zone in Seattle late Sunday when a man allegedly broke into an auto repair store, stealing items and trying to start a fire.

Workers at the business, which sits just outside the zone, called the police but said they never came.

Groups of activists took over an area comprising multiple city blocks in Washington state’s largest city last week after police officers, who clashed with them, abandoned a precinct building.

Response times to crimes including rape have soared in the area since then, according to Police Chief Carmen Best.

The incident on Sunday was captured by reporters with the Daily Caller and One America News as well as people live streaming video during the occupation.

It started when the family that owns the business was notified by neighbors that someone was “in our parking lot, swinging a hammer around, trying to break into the building,” the owner’s son, Mason McDermott, told The Epoch Times.

The police were called a number of times but they never showed up, the man said.

“It’s really disheartening,” McDermott said, adding that the alleged thief, who is also accused of starting a fire that was quickly put out, stole $500 to $1,000.

As word of what happened made it to occupiers, dozens rushed to the store and tore down fencing separating it from the street. They threatened to kill the owner’s family and employees if the man wasn’t released.

At least two people at the business brandished guns, prompting occupiers to retreat back to the street. Workers said they couldn’t search the alleged thief because he wouldn’t cooperate with them and eventually let him go.

As the activists approached the business, workers decided it “wasn’t worth the cost” to try to keep questioning the man.

Things took another turn when the man who allegedly broke in and started a fire returned to the area outside the store later in the night. He quickly left after workers pointed him out.

That prompted Raz Simone, dubbed the “warlord” of the autonomous zone, and a group of occupiers to chase down the man. He was detained inside the zone by part of its security force as people made him empty his pockets.

When someone from the crowd tried assaulting the man, he slipped away.

The man identified as Car Tender’s owner told reporters that he wants to see the East Precinct, which remains boarded up, restored, and called for local officials to “step up and represent their constituents.”

“This whole kind of mob thing doesn’t work,”‘ he added, estimating the occupation has cost his business some $55,000 so far.

Correction: A previous version of this article misstated the location of Car Tender. It is about 100 yards from the autonomous zone. The Epoch Times regrets the error.