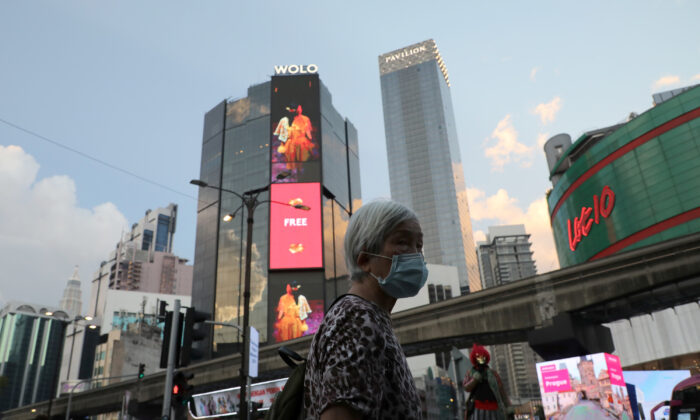 A woman wearing protective face mask walks on a street, following the outbreak of the coronavirus in China, in Kuala Lumpur, Malaysia, on Feb. 17, 2020. (Lim Huey Teng/Reuters)
WORLD

Malaysia will ease most of its COVID-19 restrictions beginning May 1, including lifting its outdoor mask mandate, as the country enters the endemic phase of the coronavirus, the Health Minister said Wednesday.

Health Minister Khairy Jamaluddin said in a statement that wearing masks outdoors will be optional and physical distancing will no longer be necessary. Mask wearing will remain mandatory for indoor activities and on public transport.

“Starting May 1, mask wearing will be optional for outdoors but are still recommended in crowded places [and] for the high-risk group,” he said in a tweet. Elderly citizens and people with underlying diseases are among those at high risk.

People will be allowed to enter public premises regardless of their vaccination status, and check-ins via the contact tracing app MySejahtera will no longer be required.

According to Khairy, only those who test positive for the CCP (Chinese Communist Party) virus, also known the novel coronavirus, and individuals undergoing quarantine will not be allowed entry into public premises.

He noted that the coronavirus testing requirement for travelers will be waived for fully vaccinated individuals, those who have proof of recovery six to 60 days before their departure date, and children aged 12 and below.

Malaysia reopened its borders to all travelers on April 1 to revive its tourism industry, which has been severely affected since its border closure in March 2020.

Malaysia reported 3,471 new infections on Thursday, 10 of which were imported cases, local media Malay Mail reported. About 82 percent of the country’s 32 million population is fully vaccinated, with half having received a booster jab.

South Korea has taken a similar move, lifting its outdoor mask mandate starting next week, though the government said that mask wearing will still be compulsory in events with 50 attendants or more and in multi-use facilities.

The decision came just days before the inauguration of President-elect Yoon Suk-yeol on May 10 and despite his team raising concerns over the move, calling it “premature,” Yonhap News Agency reported.

The incoming administration questioned whether the decision was based on “scientific virus prevention measures” and whether the government had response plans in place in the event of a virus resurgence.

“Although there were concerns, we decided not to overlook the people’s discomfort and frustration since they were not allowed to take off their masks even when taking a walk alone and while on a family trip,” Prime Minister Kim Boo-kyum said Friday.