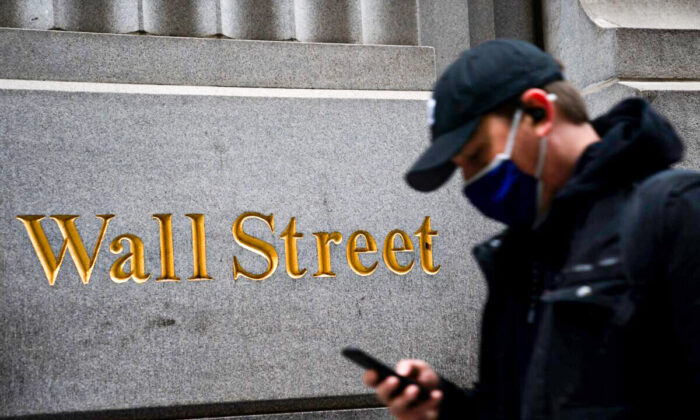 A number of major Wall Street financial institutions have moved to drop mask mandates, which comes amid a broader rollback of pandemic restrictions across the United States and in other parts of the world.

Goldman Sachs, JPMorgan Chase, and Morgan Stanley said on Feb. 11 that they were doing away with the requirement for staff to wear masks in the office, though this only applies to employees who are fully vaccinated against COVID-19.

Masks are now voluntary for fully vaccinated JPMorgan employees at the bank’s U.S. offices, according to a memo cited by Bloomberg.

“With Omicron cases declining in many U.S. locations, and expected to continue to decline, vaccine boosters and treatments more readily available, and a large percentage of our workforce vaccinated, we are continuing to make adjustments to some of these safeguards,” JPMorgan, the biggest U.S. bank, said in the memo.

Staff at Morgan Stanley’s offices will not be required to wear masks, according to a spokeswoman, though this too applies only to vaccinated employees as only they are allowed onto bank premises.

The easing of the mask mandates on Wall Street comes as New York Gov. Kathy Hochul announced an end to the state’s mask-or-vaccine mandate, which required businesses to ask customers to mask up or show proof of vaccination. Still, Hochul left in place the state’s school mask requirement, which is due to lapse on Feb. 21.

Hochul’s move to drop the business mask mandate followed in the footsteps of similar announcements by a number of Democrat-led states, including California, Connecticut, Illinois, and Oregon.

Many Republican-led states didn’t renew mask mandates after they expired last year, while some, like Kentucky, banned masking requirements outright.

It comes as a number of new daily COVID-19 infections in the United States has dropped by around 75 percent from a peak of around 800,000 per day in the middle of January. COVID-19-related hospitalizations and intensive care occupancy have also declined.

In Europe, a number of countries began lifting COVID-19 restrictions several weeks ago, led by Denmark at the beginning of February. Since then, other countries including England, Spain, and Sweden followed, scrapping quarantine and masking requirements.

Norway, which in December went into a partial lockdown due to the rapid spread of the Omicron variant, on Saturday became the latest European country to lift nearly all COVID-19 curbs.

“This is the day we have been waiting for,” said Norwegian Prime Minister Jonas Gahr Stoere at a news conference in Oslo on Feb. 12.

“We are removing almost all coronavirus measures,” he said.