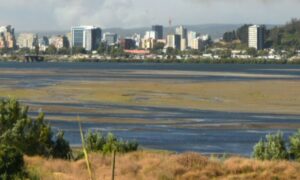 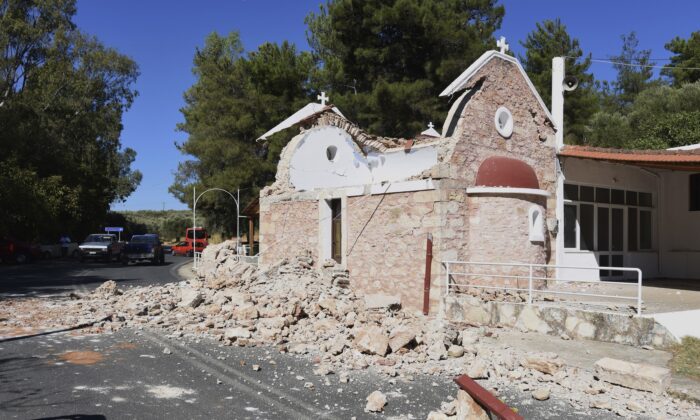 A damaged Greek Orthodox chapel after a strong earthquake in Arcalochori village on the southern island of Crete, Greece, on Sept. 27, 2021. (Harry Nikos/AP Photo)
Europe

An earthquake of magnitude 6.0 struck Greece at 9:17 a.m. local time on Monday, according to the European-Mediterranean Seismological Center (EMSC).

Local Greece outlet Skai reported one dead and nine injured as of 11:35 a.m., two hours after the initial earthquake.

The EMSC reported the quake’s epicenter at a depth of 10 kilometers (6.2 miles) near Crete, about 25 kilometers (15.5 miles) south-southeast of Irákleion, the capital of the Greek island of Crete. A magnitude 4.0 aftershock was reported five minutes later in the same location.

A total of 10 aftershocks ranging between 3.0 and 4.6 in magnitude followed in the same location, with the last aftershock reported at 10:30 a.m.

Heraklion mayor Vassilis Lambrinos told Skai that the quake was strongly felt, and that efforts were made to evacuate schools immediately. Lambrinos added that some buildings and two churches had collapsed as of 9:56 a.m.

Skai reported two people trapped, one in a collapsed church that was undergoing construction, and another in his home in the village of Patsideros. In addition, Skai also reported road slips.

The Athens Institute of Geodynamics reported a magnitude of 5.8 for the initial quake. Variations between institutions are normal and to be expected within the initial occurrence of earthquakes.

The last major earthquake in Greece was reported in March 3, 2021 with one dead and three injured.