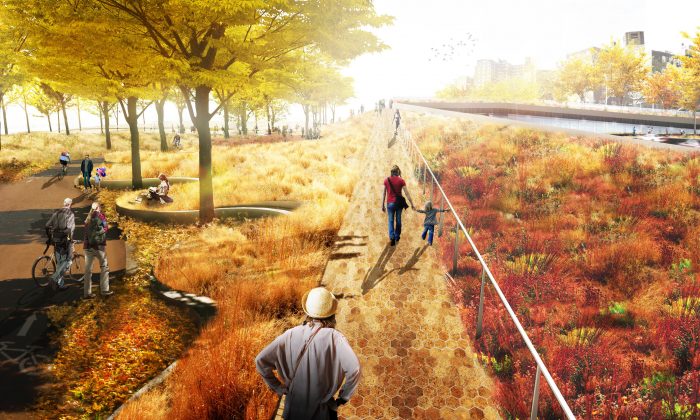 A rendering of the bridging berm in East River Park on the Lower East Side in Manhattan. (Courtesy of HUD.gov)
New York

NEW YORK—The Department of Housing and Urban Development announced the winning design for a project to protect part of the Lower East Side from future floods.

The winning design was the biggest of four projects awarded by HUD Secretary Shaun Donovan and Mayor Bill de Blasio Monday. The other projects will be built in Hunts Point in the Bronx, Tottenville on Staten Island, and in Nassau County.

The federal investment for the four projects totals $540 million. The winning designs beat out more than a hundred entries in a competition started last summer. New York’s need for resilient infrastructure has become a multibillion industry, and as a result some of the world’s leading firms submitted proposals.

The biggest project, worth $335 million, was awarded to BIG, a Dutch design and architecture firm. BIG will construct a multipurpose berm in the East River Park on the Lower East Side in Manhattan. The berm will function as a floodwall, public green space, and a natural filter.

“We are who we are because we’re the ultimate coastal city. We wouldn’t trade that in for anything in the world,” Mayor Bill de Blasio said at the Jacob Riis Houses Monday. “But it requires of us a new level of preparation and resiliency.”

The East River Park lies between the Franklin Delano Roosevelt Drive, a highway, and the East River. Superstorm Sandy knocked out electricity, water, and gas at nearby Jacob Riis Houses for nearly a week.

The Jacob Riis Houses are a public housing project named after a journalist and photographer who exposed poverty and dangerous living conditions in tenements on the Lower East Side at the turn of the 20th century.

De Blasio, who mentioned Riis in his inaugural address, has promised to align the city’s Sandy recovery efforts with his focus on ending income inequality. Steven Handel, a certified senior ecologist who worked on the BIG U project, said that the choice of the Lower East Side as the first area to be protected had much to do with the mayor’s equality agenda.

“The mission of the government is to help poor people,” Handel said prior to the announcement, motioning to the public housing buildings. “These are people that really need help. They depend on enlightened government. Wall Street can find other ways of saving themselves.”

BIG’s proposal features a berm that doubles as a series of tiered benches and lawns. Pedestrian bridges over the FDR Drive connect to the top of the berm to usher in visitors. Jeremy Alain Siegel, a designer at BIG, said that the project will have double the number of pedestrian bridges than what is currently there.

The East River Park project is part of a grander proposal, called Big U, to protect the waterfront areas of Southern Manhattan from West 57th Street to East 42nd Street.

“The brilliant thing about this plan is that you can build it in individual pieces,” Siegel said. “It protects the area that it is built for and then we can move on to the next.”

A resiliency project in Staten Island will feature breakwaters off the coast of Staten Island. The underwater structures will ameliorate the tidal waves before they get to the shore. The structures will be built from a material that contains tiny pockets that foster marine life. HUD awarded $60 million to SCAPE/Landscape Architecture to deliver to project.

HUD also awarded $20 million for a project to protect Hunts Point in the Bronx. Hunts Point is the region’s major food supply hub that is also vulnerable to flooding. Hunts Point is also located in the poorest congressional district in the United States.