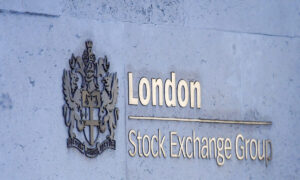 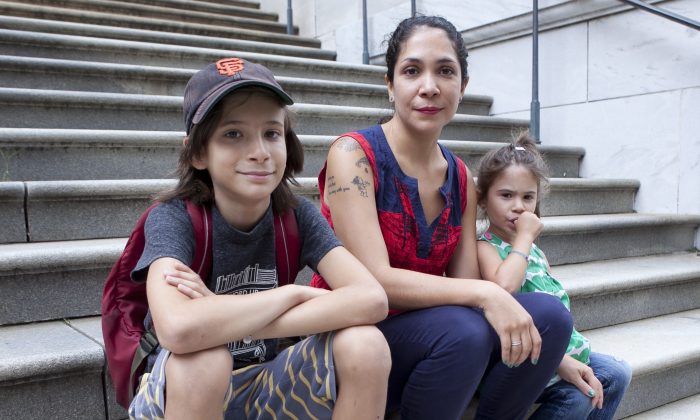 Former teacher and member of Change the Stakes Diana Zavala with her two children Jackson, 10 and Simona, 5 in front of the Tweed Courthouse, Aug. 7. (Samira Bouaou/Epoch Times)
New York

NEW YORK—Less than a third of the city’s third- to eighth-graders are proficient in English and math according to test scores released by the state—but things are not as bleak as they seem.

Only 30 percent of the students passed the math exam and less than 27 percent passed the English exam. The number of students who passed the tests dropped sharply compared to last year, but this doesn’t mean the students are doing worse—more rigorous and difficult tests based on the Common Core Standards were administered this April, designed to raise the bar for students in the city and state.

The Common Core Standards are being implemented nationwide in response to a systemwide lack of college and career preparedness. In New York City, despite rising graduation rates, a mere 22 percent of high school graduates were ready for college in 2012. The new standards are meant to give teachers the framework to prepare students for the rigors of college and real world jobs. They stress critical thinking and problem solving skills.

“This is more necessary than ever before as the standards required to earn a living and to compete in the global technological world keep going up,” Mayor Michael Bloomberg said at a press conference while announcing the test results at the Department of Education (DOE) headquarters on Aug. 7. “This is something we absolutely have to do.”

Bloomberg pointed out that the city’s students outperformed those in other large urban areas, where results were relatively dismal: just 5 percent of students passed the math test in Rochester and 7 percent in Syracuse.

Test scores in urban areas nationwide are usually much lower than their respective state averages. On average, New York City students performed nearly as well as those around the state, a significant achievement, according to Bloomberg.

Not so, according to Michael Mulgrew, president of the United Federation of Teachers (UFT), who said the results could have been much better. Mulgrew pointed out that the city had a unique advantage over the rest of the state: having the mayor in control of the school system. Bloomberg had the capacity to direct the schools to begin preparing the students for the new tests as early as two years ago, when the Common Core Standards were first introduced. But, Mulgrew said, the schools continued to teach students based on the old tests.

“This is not factually accurate and the data proves it,” wrote Jake Goldman, a deputy press secretary for Bloomberg’s office. “Our scores dropped less than many other cities on this much more difficult test because of all the work by teachers to learn how to make this shift, and they still have a long way to go.”

According to a timeline issued by the DOE, all of the students began to receive Common Core-aligned instruction in the 2011–2012 school year. Despite that, Mulgrew’s main concern was that teachers lacked a curriculum to follow.

“Common Core Standards are something we fully embrace and support,” Mulgrew said. “This mayor chose to ignore all of our pleas. We knew three years ago that this state was changing its test to the Common Core Test. We have been asking for a curriculum since that point in time. Last year we became more and more vocal about that. And we still have not been supplied a curriculum.”

In a citywide school survey conducted in 2012, 92 percent of teachers said they understood the standards and about 82 percent of principals said teachers were implementing the changes required by the new standards. According to Goldman, free curriculum resources from the Common Core Library were downloaded more than 400,000 times in two years.

Anthony Ciatto, a middle school teacher in the Bronx, said that the scores were low because teachers had not been given a curriculum.

“They put out the test and they didn’t create a curriculum in the New York City school system. You can’t expect the scores to go up without children having a curriculum to learn from,” Ciatto said.

That concern was echoed by parent groups who protested outside the DOE headquarters prior to the press conference at which Bloomberg, schools Chancellor Dennis Walcott, and State Education Commissioner John King announced the test results. The parent groups’ main concerns were the lack of preparation for the new standards among teachers and undue weight placed on high-stakes testing.

“It’s proven that test scores are not the only way to assess a child,” said Elzora Cleveland a parent of a high school-bound student, whom she preferred not to name. “These scores have once again proven that we are not where our children need to be.”

When asked whether his administration is placing too much weight on testing, Bloomberg said that testing is the only way to see what students have learned. Without it, he said, students would be hurt the most.

Some parents, like Diana Zavala, have opted out of testing entirely. Zavala’s son, Jackson, who is in fifth grade, had a negative experience with a test in third grade. Zavala, who was a public school teacher and is now a speech therapist, decided to opt Jackson out of further tests. She said that this is an option available to all parents.

“There is a process in place where they use a portfolio for promotion and evaluation. This has been around for many years,” Zavala said.

Zavala is part of Change the Stakes, a group of parents and teachers who believe that testing should be replaced with better forms of assessment. She said that last year she knew of only eight parents who opted out of standardized testing and that this year that number grew to more than 100.

Both Bloomberg and Walcott said that the new scores will serve as a baseline as the school system continues to adapt to the new standards. The DOE conducted more than 2,700 Common Core trainings for teachers last year and will invest more than $100 million for further teacher development this year.

More than a million books catering to the new standards are arriving in schools across the city. More than 800 schools are on track to receive books in August, but a UFT document points out that some 900 schools will receive these books in bits and pieces throughout the fall.

More than 15,000 teachers, out of 75,000 total, are receiving professional development this summer, according to the DOE.

Kentucky was the earliest adopter of the Common Core testing and standards. The score there dropped by a stunning 50 percent when the test was introduced. Similar to New York, students, parents, teachers, and officials were warned in advance that the scores would be low.

Improving college and career readiness rates are at the core of Common Core, and in Kentucky, college readiness among students climbed from 38 to 47 percent since the new standards were introduced.

“I know, as has happened in Kentucky, New York educators, parents, and communities will come together, stay the course and support students as they work toward mastering these more rigorous standards,” Kentucky Education Commissioner Terry Holliday wrote in an email statement to the Epoch Times.