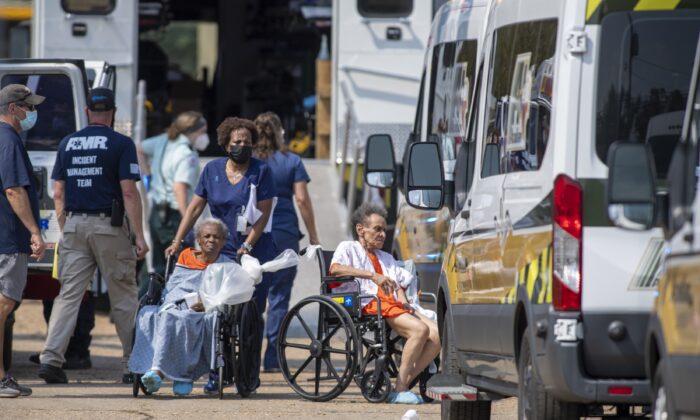 Officials in Louisiana have pulled licenses for seven nursing homes across four parishes after residents were taken to a warehouse ahead of Hurricane Ida and subjected to what officials say were substandard conditions.

More than 800 residents were taken to the Tangipahoa Parish warehouse. Seven died, and more than a dozen others required hospital care.

“All of these nursing facilities clearly failed to execute their emergency preparedness plans to provide essential care and services to their residents,” Dr. Courtney Phillips, secretary of the Louisiana Department of Health, said in a statement.

The plans were appropriate but weren’t followed, Jennifer Avegno, director of the New Orleans Health Department, told reporters in Orleans Parish on Sept. 7.

Officials say the level of care for the residents plummeted after the hurricane struck on Aug. 29.

But the owner of the homes, instead of asking for help, “was orchestrating a campaign with the goal of preventing a proper assessment of what the situation was at the site via threats, harassment, and intimidation,” a Sept. 7 notice stated.

Real estate developer Bob Dean owns all of the nursing homes. His office didn’t answer the phone or return a voicemail on Sept. 8.

The notice, sent by state regulators, informed the Dean-owned homes that their licenses were being revoked and that Medicaid provider agreements were being terminated.

“Our goal will be to determine who decided to move these patients to this apparently unsafe and potentially inappropriate facility. We wish to determine who authorized that these patients be moved to that facility, who oversaw the movement, who later turned away career staff members of the Louisiana Department of Health when they attempted to look into this situation. And why did the police chief and the sheriff state an investigation was not needed,” Landry said in a statement last week.

Five other elderly individuals were found dead over the weekend at senior living homes in New Orleans, raising the post-storm death toll.

Officials there shuttered 10 homes where unacceptable living conditions were discovered.

Avegno told reporters on Sept. 6 that residents were dealing with “fairly stark conditions,” including a lack of electricity.

“Tragically, in some places, our staff discovered residents who had died and had not yet been discovered,” she said.

Christopher Homes, the senior living ministry of the Archdiocese of New Orleans, owns some of the facilities that were closed down.

Residents are treated as “independent living tenants with leases,” the archdiocese said in a statement to news outlets.

“Without a mandatory evacuation order, Christopher Homes could not close the buildings for Hurricane Ida. All residents were encouraged to evacuate. Two hundred eighty-six residents in Orleans Parish chose to stay in their apartments or did not have the means to evacuate without the resources usually provided by the City of New Orleans in a mandatory evacuation,” the archdiocese stated.

Christopher Homes is alleged to have repeatedly asked for help from city officials in the wake of the storm but didn’t receive a response until five days after Ida hit.

“If there is an issue that this is a city matter, I own it every step of the way, including all of the people who stand with me to deliver services. This is not one of them. I think accountability needs to be where it is. And that’s all on these institutions,” she said.